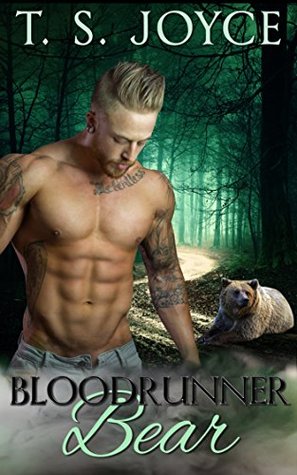 In the new world created through the events in Damon’s Mountains, all shifters are now out in the world, often working side by side with their natural enemy.  This is shown early on as Arron works along side of the vampire King, Aric in the business of saving lives… only the vampires need vengeance for the death of their Queen at the hands of the Bloodrunner Crew – and they almost get it when Aric’s mind control sends Aaron back into a burning building.  At the ending of that shift at the firehouse, Aaron stops at a local coffee shop before heading home to Harper’s Mountains.  There he will meet his fate in the charming Alana, owner of the coffee shop.  Aaron’s Bear knows exactly who and what Alana is, but Aaron is fighting the pull towards his mate.  Some light flirting, the gift of a special paperclip and Aaron is on his way.  But he’s not going to get off that easy.

Alana is charmed by the bear shifter – and if truth be told, she’s had a crush on Aaron since his teenage years when he was the smiling face of the newly outed bear shifters.  But Alana hasn’t always had a perfect life, she’s fought her own demons and come out on the other side a winner.  She recognizes someone in the middle of an inner battle.  When Aaron does return to the coffee shop she’s excited and hopeful.  Aaron is fighting his own and his Bear’s attraction to Alana – he’s no good for her, yet he cannot stay away.  A friendship only quickly heats up to more – and when Alana is attacked by his crew’s enemies he has no other choice but to bring her home to Harper’s Mountains.

I absolutely love Bloodrunner Bear.  It not only continues the story through the adult lives of several children born to the couples from Damon’s Mountains – it also shows us the changed world where not everything is all that different from before.  Aaron is not in control of his Bear.  (yes Bear is capped because he’s spoken as a separate person throughout this story)  He never has been and it’s not surprising  given how his earliest years were spent without any control, and the guidance on how to be a responsible bear only came when his mother, Rory reached out to his father, Cody for help.  Now he is terrified of his Bear harming Alana in his desire to claim her as mate, he knows he loves this amazing woman but is not sure if he is the best choice for her life or safety.

Aric, vampire king is a horrifying character given his power and resolve – yet there is a reluctance that can be felt to actually carry out the vengeance required by the coven at their former queen’s death.  He’s trying to skirt the edge of what is required but will cause as much trouble and pain as he can along the way.  Aric is not a creature I felt sympathetic towards, yet there were moments that it didn’t seem he actually wanted with a blood lust the events that he brought about.

Alana and Aaron’s story is full of an intense, believable story, definitely sexy times and the gift of the friendships of the people who matter most to Aaron, his crew.  This is an amazing gift to her readers from T. S. Joyce as she takes us beyond the original stories and gives us even more characters to love and stories to enjoy

If you love Shifter Romance then Bloodrunner Bear will delight and entertain you.  It’s a story and a series that you shouldn’t miss.