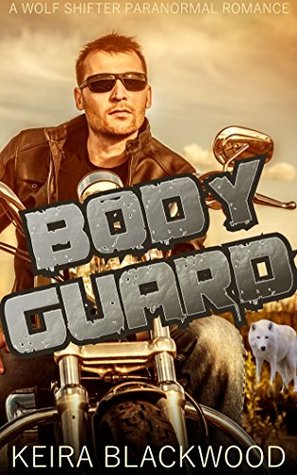 Read on for my thoughts on Bodyguard.

Bodyguard is lightly connected to Ms Blackwood’s The Sawtooth Peaks series through the pack’s enforcer and his men.  You don’t have to have read the series to enjoy Bodyguard,  the mention is mainly an introduction to what Reynolds will be doing – which at first isn’t what he wanted to be involved with.

The Alpha of a pack near to the Sawtooth Peaks’ pack’s territory has asked for help and sanctuary for one of his children.  There is a rogue gang of wolf shifters in his area and they have already destroyed property and made a kidnapping attempt on his child.

Reynolds and his twin, Witt work for the Sawtooth Peaks Alpha, directly under his main enforcer.  So far Witt has gotten the exciting, challenging assignments.  And Reynolds has no idea why he’s always assigned the errand boy duties, but he’s hoping that with the rogue wolf shifter gang causing trouble in the area he’ll finally get his chance.  Fate had other plans for him.

Alex wasn’t happy at being sent away from her father and brother.  Already annoyed that her father allows her brother Hunter freedom to go to work and live his life while the danger still exists is a major annoyance.  Left in a room at their family country cabin, Alex does something foolish – and perhaps sets her own destiny into motion.

When Reynolds gets his first look at his assignment his immediate reaction is – mate.  Alex seems just as shaken as he, now this trip takes on new meaning.  On the way back to safety this couple will face dangers, have a communication breakdown and discover just how powerful that call to their mate truly is.

Bodyguard is a short, 74 Kindle paged novella.  I can’t get into too much detail without giving the entire story away.  But don’t let length matter –  for this story packs a powerful punch in a short time.  I enjoyed Reynolds and Alex’s romance and hopefully one day Witt will have his tale told as well.

If you enjoy Shifter Romance then Bodyguard should be on your reading radar.  Even though it’s a short read, it is also a solid story with interesting characters.