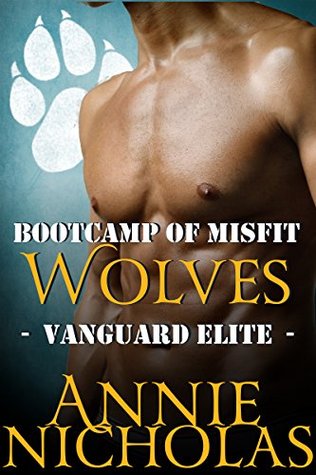 Ian’s alpha tosses him out of his car at a training camp for worthless and weak wolf shifters run by a crazy vampire.   His only choice is to escape and go lone wolf.   Until he runs into Clare…

She actually volunteered for this gig.   Her wolf is all alpha but it’s crammed into a petite package, and she definitely has no mercy when it comes to him.

The work is hard.

Clare can’t stand Ian’s disregard for her authority and he hates her driven ambition.   Sparks fly and teeth are bared.   Opposites attract they say.   If they don’t kill each other first.

Read on for my thoughts on Bootcamp of Misfit Wolves.

Pallus, one of the remaining vampires of the ancient Nosferatu has a daunting task ahead of him.  It has come to the attention of those in paranormal power that the time has come for an elite group of warriors to be found.  Men and women who would protect, defend and tackle those delicate situations that only an elite fighting group could.  When the shifter packs were asked to send one of their own to this training camp, the hope was that they would send their best.  Ah, no.  They sent, in droves, those who were troublemakers, ones that didn’t fit in or fit in too well to be allowed to stay in a power struggle.  Some volunteered for their own reasons, others were dumped in the middle of the night without so much as a good luck sucker farewell.

It is up to Pallus to train these misfits of the shifter world, cull the possible from the no chance at all – and in fact make a miracle happen.  Not everyone now at the abandoned manor, their training site, will survive.  As in truly live through this training.  Others will drop out.  Some will be sent home for various reasons.  Only the strong, the determined, the stubborn and perhaps the foolish will make it through to the ending of Pallus’ training and become a part of this new elite vanguard.  Everyone will be changed, if for better or worse is yet to be determined.

Clare is a born shifter, daughter of an Alpha and as a female not seen for very much worth among her pack.  She’s daddy’s little girl, all five feet nothing of her and she’s come to this boot camp for one purpose – to become the Alpha she knows lives within her.  Here she has the chance to be seen for her abilities, her strengths and nothing, not even a sexy wolf is going to prevent her from taking leadership of this pack.  Ian is a turned human, he’s only been a wolf shifter for about a year and he’s still struggling to fit in with his pack – which may be why his Alpha trussed him up, tossed him in the trunk and dumped him at this training site.  Fine, no problem.  He’ll take the first chance to blow this place and take off on his own – a lone wolf, he’d survive.  Until he makes that move and discovers that some of the the humans from the small town nearby don’t want shifters around and begin using him for target practice.  He’s learned a lesson the hard way, lone wolves often don’t survive long and there is safety in a pack.

Clare and Ian will discover that they are destined mates.  She may find him attractive, but she’s also going to ignore that mate thing for as long as possible.  Giving up the Alpha position is not in her plans, and she makes that very clear to Ian.  He’s going to let her get away with that – for now.  They both have so much on their plates and they need to begin working together to achieve their shared goals.  His time will come with his sexy mate.

Bootcamp of Misfit Wolves is very much an underdogs styled series.  Geeks, nerds, physically impaired, trouble makers and the not needed.  All have their own unique strengths and abilities – here is where they can become more than what anyone else thinks of them – or they can lose everything.  While we re well aware of the two fated mates, they are not the main focus – building a pack, coming together as a group, learning to survive just about anything that Pallus or the townsfolk can toss at them.. that is the focus of this first story in the series.  I enjoyed this story very much.  If you haven’t read any of the other Paranormal stories by Annie Nicholas then you are not at a real disadvantage.  There are some mentions of characters from other series, but they are quick, usually memories of Pallus, and for now, do not relate directly with this series.  The world building for Vanguard Elite is very tight for this group of people, the location and the town… that is all you’ll need to have for background.

If you enjoy Shifter Romance, I’d invite you to try out this unique group of shifters and their developing story.  Sometimes you have to learn to be the big bad Alpha and this training is extraordinary.