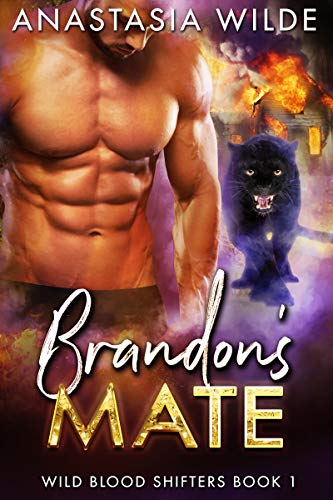 Brandon’s Mate, the first story in the Wild Blood Shifters series is, to say the least, intense.  Although this series is a next-generation spin-off from the Bad Blood Shifters series I wasn’t lost for any light background we need is given in the dialogue.  I will go back to the previous series at some point, but I do not feel I must right now in order to enjoy this newer series.

Let’s be frank, Brandon is a mess when we meet him.  He left his pack years ago or rather was asked to leave by his Alpha.  Brandon was out of control then, he’s an alpha himself and was on the verge of an alpha challenge against a leader he liked, respected, but his panther was simply too alpha for him to remain.  He left in the dead of night, not saying good-bye to his friends or to the young girl who had his heart.  They were better off without him in his opinion and being kicked out of the Bad Bloods just proved that fact.

The years in between then and now were rough, and there were a few times when Brandon believed in a better future until that was also ripped away from him… only this time, death was the cause.  Now he’s haunted by ghosts, actually, four ghosts who eye him with anger and accusations.  He’s in this tiny town to get justice for those lost souls – and if he loses his own life in the process, at least no one else he cares for will… until the past comes crashing into the present in the form of Kitty, the girl he left behind.

Kitty isn’t a little girl anymore, devastated by her best friend, the man she dreamed of one day being with forever, leaving her behind.  No.  Today this Kitty is kick-butt and take names and loves with a fierceness that is undeniable.  Kitty has a few secrets, she has prophetic dreams and her monster wolf is more often than not out of her control.  She knows Brandon is in trouble and she, along with two friends, men who once considered Brandon a friend are on their way to step into chaos whether Brandon wants them there or not.

I was so easily drawn into this world.  Brandon and Kitty are perfect for each other, even in their perceived imperfections.  While I liked Brandon, even understood his reasons for his actions it was Kitty who stole my heart in this one.  Kitty is adorable and fierce, gentle and deadly, funny and snarky – she’s the embodiment of a woman’s anger at her mate leaving her and the take names attitude of you need my help so shut up already.  The danger that this crew is up against is deadly, as they’ve already proven.  Yet, Brandon is determined to bring those responsible down – but there are a few surprises in store, ones that will fuel the rest of the series in some ways.

I had a blast here, and in some ways, it’s not a bad thing that I’m coming to this series a bit last – at least now I can binge-read my way through since so many titles are out already.  If you love an intense romance with danger, snark, and sizzling chemistry then this story and series would be a perfect fit.