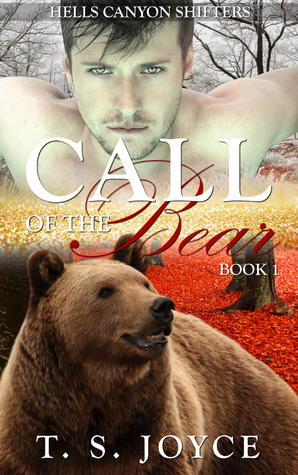 When tragedy brings former childhood sweethearts Samantha Young and Bronson Cress together in the town they grew up in, Samantha learns that things are not always what they seem.

Six years ago, Samantha was devastated when Bron made a decision that shattered their relationship. Determined not to fall for him again, she must avoid the man who broke her heart. The small town of Joseph has changed since she lived there last, and as she stumbles onto a community of people she doesn’t understand, she must figure out if Bron is worth her life being thrust in front of a clan of legendary shifters.

Bronson Cress is set to become alpha of the clan of bear shifters in Hells Canyon, but when his ex blows into town, he isn’t prepared for the havoc she wreaks on his heart. Except he isn’t the only one who’s noticed her return, and the danger that chased her out of town years ago is an even bigger threat to the woman he has sworn to protect now.

Can he control the bear that lives within him? More importantly, can he fulfill his oath and keep her safe?

Part of the interesting world of shifters is that every author has their own unique lore for their creations.  This could be consistent in all of their stories, or it could change up in their different worlds.  The lore for the shifters of the Hells Canyon Shifters world is far different from say, the overarching world of Damon’s Mountains.  The lore of the world that Call of the Bear is set in has very stringent rules for interactions between shifters and humans.  It’s fine to have humans as friends or lovers – but you simply do not marry them.  Samantha is a human in love with a man she has no idea can turn into a bear at a moment’s thought.  She simply knows that she loves Bron, and he loves her back.  To her their future is bright and full of possibilities, together.  The reality is that as a future Alpha, Bron has to go through with an arranged marriage.  He, and several others of his clan would make the break and head out on their own but for one thing – Samantha’s life has been threatened and if Bron does not go through with the arranged marriage those in power will make good on their threat.  Unable to explain to Sam exactly what he is, Bron will seemingly casually  announce his upcoming marriage at the worst possible emotional moment.  Which serves the purpose of breaking Sam’s heart and sending her away from the area – which will save her life.  Even if it dooms him and his bear to a life without their mate.

Years later Sam is back in town, hoping to avoid Bron and his wife.  Unfortunately she sees something that she shouldn’t have and her life is once again in more danger than ever before.  Bron has done his duty, and now his so called marriage is in shambles, and his life isn’t much better.  When Sam is once more in danger, this time he will not stand silently by.  But the most surprising person of all seems to hold the answer, if  Sam is willing to take the risk.

I enjoyed my time in this world.  I ended up falling in love with the Damon’s Mountains series first, now I’m catching up on some of the back list of stories left to be added to my own list.  Call of the Bear is intense, it’s a different lore to become familiar with but no less enjoyable as a world to step into.  Bronson and Samantha make a unique couple, faced down unusual challenges and came out better than anyone expected.  It’s always enjoyable to me when the person you think will be a huge jerk is the one to save the day in the end.  I like that kind of twist.  Hot and steamy, of course, a love to fight for and enjoyable secondary characters.  I’d recommend this one without hesitation.