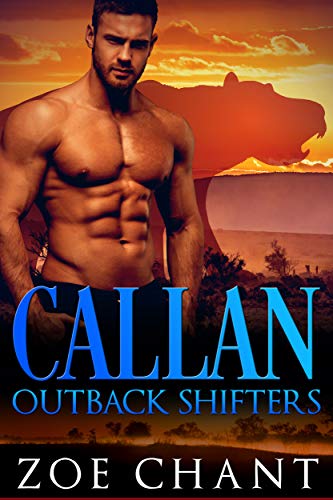 Everything’s hotter down under. Especially the shifter cops.

When Ella was just a kid, her deadbeat dad ditched her in Australia. She’s still there, working as a biochemist. And apart from a few little trust issues, she’s gotten her life on track. Until now.

Her lab? Trashed. Her apartment? Destroyed. Her life? Over. And now she’s on the run with a mysterious and insanely hot cop who just happens to turn into a massive extinct beast, in the middle of the Australian wilderness, pursued by some really weird enemies.

Shifter cop Callan has been a tough field agent for ten years. He’s built his reputation on being cool, calm, and collected. But nothing’s prepared him for the maelstrom of emotions that the beautiful, fiery Ella unleashes within his heart. It goes against everything he’s been trained for, but when he realizes she’s his mate, he knows he has no choice but to help her – no matter where that leads them.

With a dangerous enemy hot on their heels and ghosts from Ella’s past coming back to haunt them, protecting her won’t be an easy job.

Can they solve the mystery before time runs out? Can sharing a Tim Tam slam by the campfire be enough to get Ella to open the heart she’s kept closed off for years?

Tiles in the Outback Shifters series include — Hector – Callan – Euan –

‘Callan’ which is the second story in the ‘Outback Shifters’ series can only be described as intense from the very start as Ella’s work, lab, home, and perhaps her life is being destroyed by unknown enemies.  She’s reacting on instincts now and following directions that make no sense but it’s the only clue she has as to what is happening to her or why.  She never expected what she was about to step into.

We first met Callan in ‘Hector’, and I actually loved his interaction with one adorable baby shifter, Ruby.  Now it’s Callan’s turn to find his mate in the most unexpected way.  Chasing down clues, fighting an enemy that is proving itself totally unexpected, and discovering the woman’s he’s set out to find is, in fact, his mate – certainly not another day out in the field for Callan.  Keeping his mate safe and protected is his first priority – that and trying to explain exactly what he is without Ella running as fast as she can in the opposite direction.  She’s been through a lot in the last day, discovering she’s the mate to a shifter, let alone an extinct shifter animal, is a lot to ask of any human.

The action is fast-paced, the villains vile, and the mystery deepens in this story.  We’ll run into Hector, Myrtle, and Ruby once again as well as getting to know the rest of Callan’s team a bit better.  I was easily caught up in this story, the lies, the danger, the outcome kept me glued to my Kindle.  I’m definitely looking forward to Euan’s story knowing what we learned about him now.  If you love a good shifter tale, then you’ll want to check out ‘Callan’ as soon as possible.