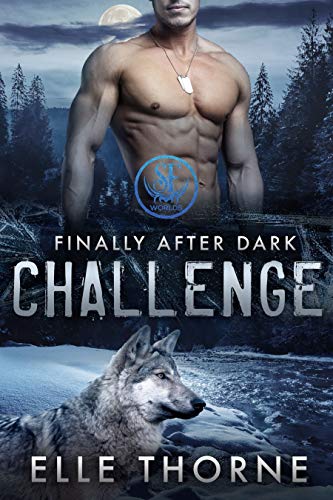 Range and his small but lethal pack of dire wolves have been the go-to guys for Mae Forester. But Mae didn’t send them this gig. It came out of the blue. Range and his team not in a position to turn down a buck, not these days. The picture of a violet-eyed beauty in the assignment file further complicates matters.

Eira and her sisterhood are descended from a long line of warriors. They spend their immortal days avoiding detection by an age-old enemy, while at the same time honing their skill sets.

Seems she’s run out of luck when fate decides to put her in the crosshairs of that enemy, and at the same time pushes her into the path of a dire wolf shifter that is nothing like the shifters she’s heard of.

Challenge is the second title in the Finally After Dark series which is a spin-off from the Shifters Forever World.  To say that Range and Eira’s story is intense is a vast understatement for there is danger surrounding this couple from their very first connection – and even before that happens.

There are many twists and turns in this one, as well as the discovery of another myth-worthy race in modern times that kept me glued to my Kindle from beginning to the ending – and eager for more.  I feel I need to be a bit careful in giving away details for there are always readers who haven’t read a book even if it’s been out for some time now.

I liked Range very much.  He’s a man, a dire wolf shifter who even when he messed up can dive right in to make the situation right.  He can’t change what happened but he can ensure that Eira has a fighting chance against unseen enemies.  Eira is a kick-butt warrior who never expected to find one man for life – it’s not part of her nature, her history, so her reactions to Range take her by surprise and have her taking chances she normally would never do.  I also liked Eira so much for she is not only fierce but protective, she takes no crap from anyone, including Range, but she also can accept help when necessary.  Yeah, this couple belongs together – even if feathers are going to be ruffled because of their mating.

I had a blast with Challenge and if you love a really good Shifter Romance full of intrigue, danger, sizzling sexiness and characters who leap off of the page then you’ll want to pick this one up soon.