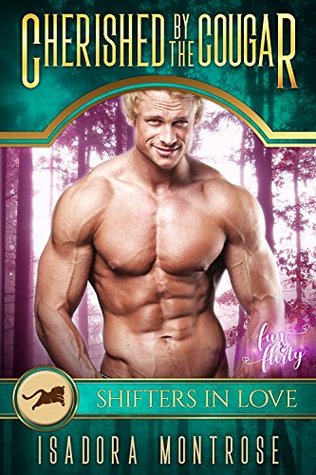 Is a marriage of convenience any way to meet your fated mate?

Sorceress and single mom Claudia Peterson has returned to Mystic Bay where the paranormal is normal in order to raise her little boy.If only the Town Council didn’t object to shifter-sorcerer hybrids. They want to toss her and Jimmy off the island of West Haven.

When rumor names him as Jimmy’s father, cougar shifter and summer resident Ryan Rutherford is compelled by the head of his clan to marry Claudia.Trouble is alpha male Ryan has never met this curvy witch – it’s his cousin who’s the father of her child.

Holding documents forged by fairy matchmaker Robin Fairchild, shifter enforcer & former Marine Ryan shows up on Claudia’s doorstep to inform her that they’re married. The attraction between them is instant, but Claudia suspects it’s only a spell. Ryan worries that his luscious wife gave her heart to the tom cat who abandoned her.

Titles in the Mystic Bay series include:  Desired by the Dragon – Cherished by the Cougar – Beloved by the Bear –

I had a blast with Cherished by the Cougar.  When compelled by his grandfather, the Alpha of his cougar clan, to marry a sorceress with a young son, Ryan has questions, lots of questions.  It seems that the small town of Mystic Bay believes that Jimmy is a danger to those around him.  Visions of some old troubles brought about by hybrids has the Town Council in a tizzy.  Though his grandfather wants this marriage for another reason, it seems that young Jimmy is part of their clan, although he does not know which member of the large family of brothers and cousins is the actual father.  Still, he is part of them and no one messes with the cougars, not even the town of Mystic Bay and their flourishing gossip system.  Ryan has been picked for this marriage of convenience for one simple reason, he’s the last single male who could marry right now.  Ryan has another reason to agree, he’s dying from a shifter snake bite, the poison even now setting his blood on fire.  He might not be able to offer his protection physically for long, but after his death at least the mother and child will be safe.  He didn’t expect to meet his fated mate, and he didn’t expect to fall in love with a mischievous  little boy with very strong powers either.

Claudia is a sorceress with a very powerful talent, one that she keeps as secret as possible.  She trusted in a man full of lies and the result is a hardened heart and an adorable little boy she will fight to the death to protect.  She didn’t expect that she’d be facing a sexy, handsome, alpha male determined that they are married, will stay married and that she should trust him with herself and her son.  Jimmy is a bit out of control, and she knows that they are in danger of being kicked out of the only safe place to raise Jimmy.  She reluctantly agrees with rules in place.  She’s falling for this amazing, selfless man who is slowly dying before her eyes.  Claudia is convinced that the town matchmaking fairy has her under a love spell so anything she feels for Ryan cannot be real… right?

Jimmy is adorable and steals this show quite easily.  Ryan and Claudia are an intriguing couple.  She is very standoffish even though she feels the pull of the bond between them.  She’s been burned before, it’s hard to believe that Ryan is for real, and she has a son to protect so her reactions are understandable.  Ryan simply wants to take care of his new family and he will fight the town of Mystic Bay itself to keep them safe.  There are a few jerks to deal with, a bit of danger and mystery, some sizzling steamy moments and a love story that anyone will enjoy.  If you enjoy Paranormal Romance or Shifter Romance then Cherished by the Cougar, and the entire Mystic Bay series should be on your reading list.