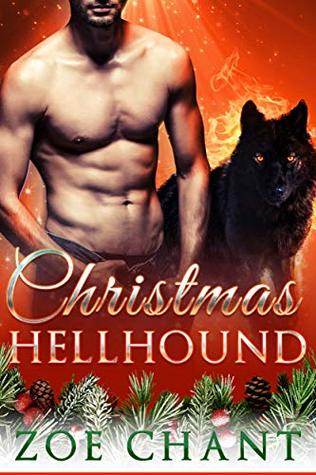 All Caine wants for Christmas is to get rid of his hellhound.

Twelve months ago, Caine Guinness was attacked by a pack of hellhound shifters and became one of them. All he wants is to be human again. His search for a cure brings him to snowy Pine Valley, home of magical dragon shifters, Christmas cheer… and Meaghan Markham.

All Meaghan wants for Christmas – is a merry Christmas. Just one.

Meaghan has never felt at home anywhere. She’s always too big, too loud – and never enough. Until now. Caine is everything she never let herself dream of. Kind. Caring. And hot as hell.

But all isn’t well in Pine Valley. Mysterious creatures are attacking the town, and Caine is the only one who can stop them. If he can learn to trust his hellhound. And even if he can…

Can a hellhound really save Christmas?

It’s hard to pass up a Christmas Romance, especially when it’s a shifter we don’t often see and their story is published on my birthday.  Hey, who can pass up a birthday gift, right?  *wink*

Christmas Hellhound is a story that’s going to tug on your heartstrings, it’s going to mess with your emotions, and eventually, give you an amazing happy ending… but we as well as Caine and Meaghan are going to have to work to get to that happy ending.

Caine has traveled to Pine Valley for one purpose, to rid himself of his hellhound.  The monster that lives within.  He’s heard rumors that the shifters here, specifically the dragons know how to remove their animal and he wants this thing gone.  In reality what Caine knows about being a shifter could fit on the head of a pin.  And he’s about to get educated, real fast.

Meaghan has always pushed her way in.. to friendships, to locations, to people’s lives.  She believes that it’s better to push now and hurt later.  She’s come up through the foster care system and truly believes she’s never going to be good enough for anything that lasts.  So she pushes and demands and makes herself a pain in the butt until it’s time to move on to a fresh start.  Now she’s pushing the people of Pine Valley to a breaking point.  Someone is out to ruin Christmas.  This ghost gang that no one can see except for glimpses of fire and smoke, but their evil intentions are very clear.  Why everyone in town is fighting her on believing in their existence is annoying, it’s as though there’s this huge secret in Pine Valley and no one is letting her in on it.  Doesn’t matter, Meaghan will save the town and Christmas on her own if she has to.

Caine and Meaghan are truly two wounded souls for different reasons.  Their story is about to hurt them even more before the joy happens but what an adventure to get to that point.  I fell in love with Caine’s hellhound.  And without saying more I think that you’ll understand why as you read Christmas Hellhound for yourself.  We’ll meet up with some old friends from A Mate for the Christmas Dragon, and add a few more pieces of information about the lovely tourist town of Pine Valley.  I had a blast with this one, and if you love Shifter Romance then I’m betting you would, too.