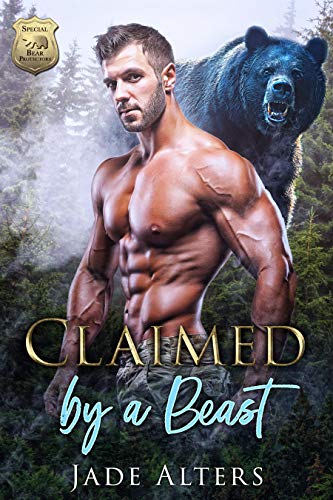 ‘Claimed by a Beast’ is the third title in a standalone collection entitled ‘Special Bear Protection’.  I have read the first story in this collection, ‘Alpha’s Second Chance’, although I have not reviewed it.  I’m not seeing a connection or thread that ties all of these stories together aside from all the men being in the military and bear shifters – for that reason I’d consider this story a standalone.  I have read these two titles out of order, which is unusual for me, but so far they feel like individual stories linked only through shifters/military.

Adelaide and Noah make an intriguing couple for many different reasons.  Adelaide is a TSA officer who gets a very bad feeling about two passengers debarking from a very long flight with only briefcases – it sets off red alerts in her mind but her boss disagrees.  She’ll even go so far as to follow them as she’s offduty around the time they were leaving the airport.  The fact that they headed to a secluded area sets off more warning bells but there’s not much more she can do right now.  That is the same night she ‘meets’ Noah for the first time through the Hotline she works for (Adi is her shortened name as a counselor there).

Noah has been through hell and back on his latest deployment and is suffering badly from flashbacks, blackouts, and PTSD.  What he witnessed would destroy a lesser man and he’s reached out to the hotline his superior recommended never realizing that connection would lead him to his mate – and a whole lot of trouble.

‘Claimed by a Beast’ is full of action, sizzling sexy times, and a couple who really do fit together so well.  It’s an emotional journey as we witness what the flashbacks do to Noah and his very real fear that he could unknowingly harm someone, especially a human who is his mate, Adelaide.  I enjoyed watching the caring interactions between Adelaide and Noah during and after those times when he was most vulnerable.  She is, in may ways, his rock – just as he is her protector.  The balance is there and slowly will even out over time.  I enjoyed my time in this world, with this couple.