Posted May 20, 2016 by Marsha in Shifter Connected, Shifter Series / 0 Comments 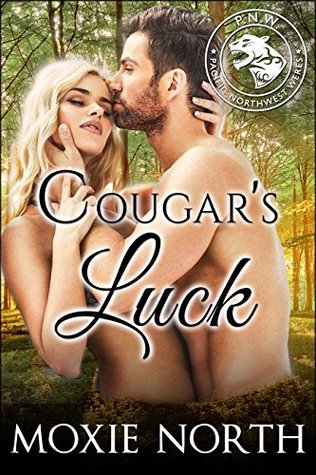 A computer genius, a dedicated gamer, and on some nights a cougar shifter, Everett Hayes had his whole life in front of him. Where that path led he didn’t know. Computers were his refuge until he met Layla.

Layla Klein loved her pack, loved her crazy family, and totally dug her job overseeing the hottest club on the Vegas strip. A few missteps and some unwanted attention didn’t dampen her enthusiasm.

A chance meeting in the night. Two shifters from two different packs. Sometimes love happens fast and lust happens even faster. Doesn’t mean your past won’t catch up with you.

read on for my thoughts on Cougar’s Luck.

Layla and Everett’s romance is a bit different from the other couples in both the Pacific Northwest Werebears or this PNW Cougars series.  This smokin’ hot couple are both shifters.  Both know and understand that they have a fated mate “out there” somewhere – they are simply waiting to find them.  They might “know” what is fated for them, but in reality when they meet they get a completely new understanding of the term…mate.

Layla is a very dedicated worker at her family’s hotel on the Las Vegas strip.  Their hotel is the hottest and coolest spot on the strip and she will continue to keep it right at the top.  She rarely gives herself a break, aside from fantastic shoes, outfits and the occasional massage.  Layla is driven.  She is also waiting for her mate, and if she pushes herself at work in order to make the time pass and keep her mind off of the waiting – that’s her secret to hold.

Unfortunately, Layla has a stalker in the form of a one date wonder who believes his role as the son of the local mob boss gives him the right to take what he wants.  Between phone calls, flowers and a never ending monologue  of really bad pickup lines, this jerk does not understand the meaning of NO.

Everett is a geek.  And proud of it.  He has no interest in the family vineyards, his love is computers and gaming.  When not doing one, he’s most likely doing the other.  Finally giving into his big brother Dax’s Alpha command that he head to Vegas and help out the Klein pack with their hotel security, Everett reluctantly heads to the desert.  If he’d had any idea of who waited there for him, he might have moved a lot faster.

While on a midnight Pack run with the Klein pack, Everett and Layla finally meet – and that meeting is explosive.  Each instantly recognizing their mate without question.  Without one mate being human, and needing to ease into the animal spirit part of their life together, this couple moves quickly to take their mate status to bonded in minutes.

While Layla and Everett become accustomed to finding each other – Layla’s stalker turns up the heat.

Cougar’s Luck is a more powerful or perhaps more intense story.  And I believe that is because here are two full shifters, they have known their entire lives about their animal spirit’s existence and known that there is a fate decreed mate in the world who will match them completely.  Their physical bonding happens so much faster because frankly there is no human to have to explain what a shifter is or what mate bonding involves.  Also the fact that the reader is aware of Layla’s stalker early on in the story also ramps up the intenseness of this story.

I don’t give away spoilers – but if you have read any of the previous novels you will know Dax and Everett’s mom, Lilibeth.  So wait for it.  That’s all I’m gonna say.  *wink*

Once again, Ms North drew me into her shifter’s lives and delivered an excellent story for them.  Now I simply have to wait for the next story.  If you enjoy Paranormal Romance, shifters specifically, then you will love Cougar’s Luck.

(This title was originally reviewed at my Haunted Bookshelf blog.  I wanted all of my shifter romance reviews in one spot, so this title has been brought over to Shifter Haven.  Both reviews were written and created by me.)