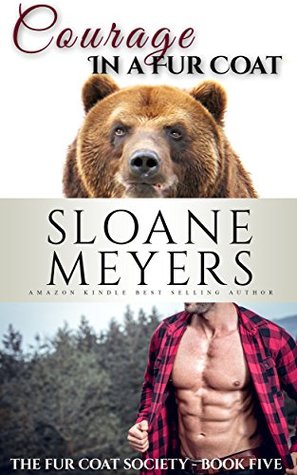 Sometimes, falling in love shows you how strong you really are…

Lily Young has spent her life being remarkably unremarkable. She prefers to hang out in the background, never venturing out of her comfort zone. But when she’s cured of a supposedly incurable disease, she has the chance to save humanity by stepping into the spotlight and letting the world know about the cure. Lily finds herself torn between her desire to avoid anything that’s remotely risky, and her desire to help those suffering from an awful flu epidemic. To make matters worse, the gorgeous bear shifter assigned to help her with her mission is the biggest daredevil she’s ever met. But the more she falls for him, the more she realizes he might be the one person who can help her find the courage hiding deep within her.

Grizzly Shifter Sebastian Rowe, known to his close friends as “Bash,” is stubborn, loud, and not afraid of anything. He’s also lonely as hell. He wants more than anything to find a kind-hearted lifemate, but none of the good girls want anything to do with a risk-taker like him. But when sweet, timid Lily comes into his life, he realizes that his gritty personality might be just the encouragement she needs to finally break out of her shell. Things get even more complicated when the pair realizes that there’s an enemy out there that would rather see them dead than let them spread the word about the cure…

Can Lily and Bash find a way to save the world—and each other?

With the cure for bear flu firmly in hand, our gang now has to find a way to get the cure to the humans who are dying… and the government that most likely will not trust anything coming from Shifters hands.  Lily is living proof that the cure works.  And it makes the most sense for her to be a major part of getting that information into the hands of the President – but no one knows where he is.  It’s not an easy task, it’s not as if she can walk right up to the White House, right?  Well… maybe.

To complicate matters even more, Lily is sent on this mission with the biggest risk taker of all… Bash.  Watching his friends find their mates, even in these crazy times has brought home to Bash just how lonely he’s become.  He wants that connection, that someone who sees his every flaw, and accepts him just as he is, risks and all.  Timid little human Lily shouldn’t be on his mind, but it’s becoming obvious that she’s the one his bear’s been looking for.  Now all they have to do is survive the attempt to get the cure into the President’s hands… and maybe fall in love along the way.

I have adored Sebastian from the beginning.  He’s Alpha, strong, stubborn and a crazy risk taker.  His courage is unquestionable and his sexiness is never in doubt.  Paring him with Lily was a perfect match.  She needs to learn from his courage and attitude about life.  And he needs her calming caution to counterbalance his personality.

We are closing in on the ending to The Fur Coat Society series.  I wold have said there is only one story left, but Ms Myers has given us a Christmas gift that further wraps up this series, so from this point there are two stories yet to be told.  The struggle to get the cure to the humans was valiantly fought against such odds.  It made me proud (for some reason) to discover that the President believed them and made policy to make amends to the Shifter community for what had happened to them.  Fear only begets more fear in the end.  It was a well thought out part of the story line that made perfect sense because everyone had been played by evil men.

I would definitely recommend this story and the entire series.