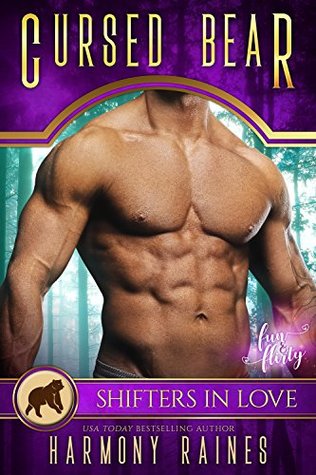 I love a long set of series that connect, it brings a sense of history, community and familiar places and faces to my reading enjoyment.  So I was excited to see that Ms Raines’ spin-off from the Return to Bear Creek series gives me all those things and so much more.  What also caught my attention was the direction of this new series.  We all know (well, we shifter lovers) that every shifter has a fated mate somewhere, and our enjoyment is when they finally do meet and begin their lives together.  But what about those shifters who never found their fated mates?  It must be pure agony and a life filled with loneliness to know that their one person is out there but not with them.  This series is full of second chances, and this is why I love the magic of Ms Raines’ imagination.

Cursed Bear picks up shortly after the ending of Undercover Eagle, Liam and Beverly’s story.  We met Julius, the owner of The Catherine Hotel, briefly in their story, and got a hint of his missed mate.  In truth, we actually had no real clue as to the pain, sadness and despair that Julius has gone through without his fated mate – for he had found her, and lost her to another man, another shifter in the same moment.

Cath and Julius’ story drew me in from the very beginning.  I’m going to admit that I read this one with some misty tears in my eyes at times.  Such sadness for them both all because of one man’s selfish lies.  They are both strong people, life has made them that way but together at last they fit so well together.  I loved this couple and their second chance at a future together.  There are twists and turns in this story, some danger, a few familiar faces and the introduction of some more secondary characters to add to our community.  If you love Second Chance Romance and Shifter Romance, then this love story will melt your heart.  I would highly recommend Cursed Bear, the Silverbacks and Second Chances series to any Paranormal Romance or Shifter Romance reader who needs that happy ending and to know that love does triumph in the end.  I am eagerly awaiting Lucky Bear to see who gets their second chance next.