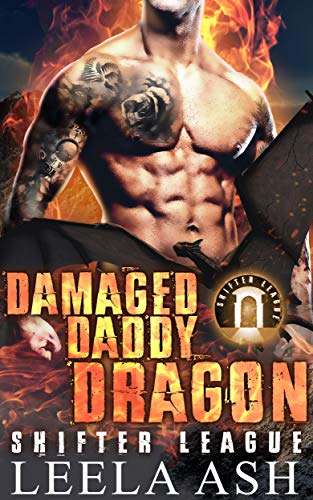 ‘Damaged Daddy Dragon‘ begins the ‘Shifter League‘ series with an intriguing tale of shifters searching for hidden portals to their original home worlds in order to stop those who would destroy everything in sight entrance to any of their worlds, this one included.

While I frankly don’t see this as a series for me, one that I would follow faithfully, it is still an enjoyable story with interesting twists and a very nasty female in the mix just to make things interesting.  Quinn and Apollo seem an unlikely couple on the surface yet this woman is his mate, even if he no longer believes in fated mates after his daughter’s mother took off without a glance back.  Trying to figure out his attraction to Quinn and complete his mission is complicated, especially when his daughter enters the picture and the danger ratchets up for everyone.  And when his past makes an appearance – nothing and no one is safe.

Without giving away spoilers to the series, I did get a chuckle from near the ending as Apollo and the men, a bear shifter, and a wolf shifter, who were also assigned to find the portal make an amusing discovery and declare themselves by a new team name.  I chuckled out loud right then.  I enjoyed the story, I don’t usually follow along on the ‘shifters are aliens from another planet’ plotlines – that’s simply not my Shifter reading enjoyment.  So when I say I’ll pick up the books over time, it’s not because the story isn’t good, it is – but because it’s not in my usual reading/story zone.

‘Damaged Daddy Dragon‘ is an interesting introduction to the series, some world building but naturally as dialogue or part of the narrative.  If you enjoy Shifter Romance then give this story a try, you’ll never know until you read the first one.