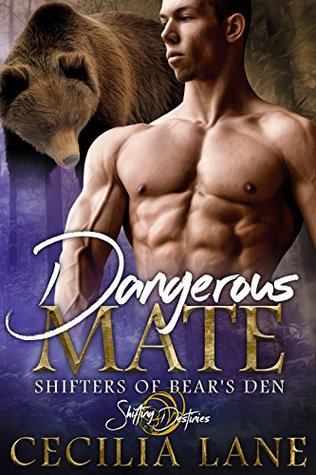 A Bear spoiling for a brawl.
Cole Strathorn fights fires. That’s all he’s ever wanted to do. He thrives on danger and protecting his clan. No one would mistake the six-foot-four, gruff bear shifter for a freaking baby sitter. But that’s exactly what he’s become thanks to an assignment from the town’s mayor. Cole’s new job requires him to keep an eye on the government scientist who has arrived in Bearden to study the shifters.

Cole expects a clichéd nerd with horn-rimmed glasses and a pocket protector, but he’s pleasantly surprised to find his charge is a lovely, curvy and very appealing woman. A woman who smells like she might be more than an assignment. The shy but brilliant scientist might even be his mate. Her addicting scent certainly arouses his bear.

A head for science, but a body for research.
Rylee Garland has come to Bearden to work. She doesn’t have time for distractions or bossy bodyguards, even if they’re tall, dark and gorgeous. She’s determined to ignore the tension sizzling between her and Cole. Her reputation hangs in the balance. If she doesn’t solve the mysteries swirling around the small town, she can forget about keeping her job.

But it grows harder to resist Cole’s charm. One wicked-hot kiss leads to another. Is Cole for real? Or is he just using his seduction skills to get information? Rylee’s had enough heartache for one lifetime and the deeper she falls for Cole, the more she worries he might not be what he seems.

A war brews.
While Rylee and Cole fight their attraction, sinister forces gather in the town of Bearden. The government might want information about the shifters, but there are others that seek something darker: total shifter eradication. The threat lurks, and the menace is real. Rylee and Cole must set aside fear and desire and join forces if they hope to save the shifters of Bearden.

“Dangerous Mate” is the second story in the Shifters of Bear’s Den series, which is part of the Shifting Destinies world.  All of the titles in these series which make up their own world can be found on the Cecilia Lane page.

“Dangerous Mate” is the second story in Cecilia Lane’s series Shifters of Bear’s Den, and it brings us further into the initial reactions of the world when shifters, fae, vampires and more are revealed to an unsuspecting world at large.  One of the things that have always drawn me to Science Fiction or Paranormal stories are the possibilities, the “what ifs”.  And I firmly believe that should there actually be other intelligent beings in the universe who would be foolish enough to make contact… they would be treated much as the citizens of Bearden were in this story.  Fear of the unknown and hatred fuel each other, unfortunately, one crazed fae’s decision to tell the world about the supernaturals living alongside humans has only created largely panic and fear.  And we see that so very clearly in “Dangerous Mate”.

I enjoyed getting to know Rylee very much.  Watching her grow from the closed off, frightened young woman who first appeared in Bearden to do research that she believed in, that will do good not harm to a woman that can stand beside her man, take on enemies that threaten all she knows of the good people of this town is quite an amazing journey.  Yes, Rylee and Cole work very well together — but I enjoyed seeing her become… more as she faced her past and embraced a different future.

We’ll meet a few new characters as the town of Bearden begins to settle into a new role for them.  The story is rich in intrigue, fast-paced action, steamy moments, more than a few chuckles and a better feel for how this series is developing.  I can see the possibility of an entire world beginning with this series, and I’m definitely onboard with discovering what is to come in this series and beyond.  I’d not hesitate to recommend “Dangerous Mate” to any Paranormal Romance or Shifter Romance reader who loves a good story, intriguing situations, some mystery, lots of danger, people to call book friends and a couple that simply belong together.