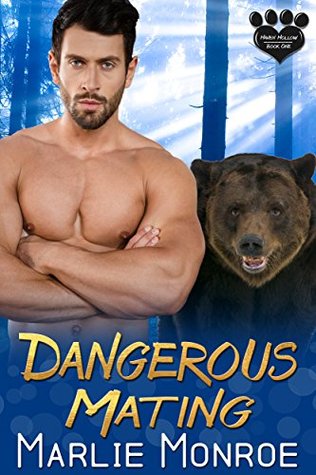 Since the birth of her child, Eliza Anderson only had two goals: to work hard and care for her infant daughter. A shocking discovery about the paternal half of her baby’s heritage leaves her scrambling to find the specialized care her daughter needs. After being turned away from one human-only establishment after another, she sets out to find assistance deep in the heart of shifter territory, where she discovers much more than she bargained for in bear shifter, Carter Slade.

Hope for the future…

Carter Slade wasn’t looking for love when Eliza Anderson walked into his life and turned it upside down. Excited by the discovery of his voluptuous mate, he throws his all into courting her with every intention of claiming her and her beautiful baby girl as his own. He’ll do whatever it takes to prove he’s the right man for her.

A future in jeopardy…

Just as their relationship takes off, an unexpected adversary steps in and threatens everything Eliza holds dear. Although Carter would gladly lay down his life for the woman he loves, he may not see the danger coming until it’s too late

Titles in the Haven Hollow series include:  Dangerous Mating –

I got the chance to read a new to me author’s first story in a new series today.  I happen to love finding new authors to follow, and Marlie Monroe has enough of a back-list of books to make me a very happy future reader.  *grin*

Eliza’s adorable six month old daughter, Audrey had a few surprises in store for Mom… most importantly the sudden flash of golden eyes that signal her shifter nature.  Although not a shifter herself, Eliza figures her baby’s deadbeat, disappearing dad had a few details he neglected to mention during their time together.  Doesn’t matter in any event, except that Eliza is quickly going to learn just how many shifter haters she’s surrounded by… and one in particular who will turn out to be the most dangerous of all.

Carter and Eliza’s relationship is a sexy slow burn… for a shifter, that is.  Carter knew this lovely lady was his mate immediately, she and her baby would be his family eventually.  Right now Eliza’s going through a lot of stress filled times, so he’ll go about winning her the human way and maybe hope that she won’t keep him waiting for too long.  Eliza’s situation goes from bad to worse, but she doesn’t really let Carter know about the threats even though they’re getting closer each day.  Their relationship is natural, sexy and believable.  There are a few twists tossed in and one I wasn’t really prepared for as I had pegged someone else as the culprit.  It’s always nice to be wrong I find… it simply means the author has that ability to throw more than a few surprises my way, something I enjoy.

Dangerous Mating begins a series that I can’t wait to dive into.  A small shifter town with some interesting residents, plus Carter’s brothers.  Yeah, I’m thinking I’m in for an adventure with this series.  I would definitely recommend this story for any Paranormal Romance or Shifter Romance reader who enjoy a solid story, likable characters, a few surprises and steamy sexy moments.