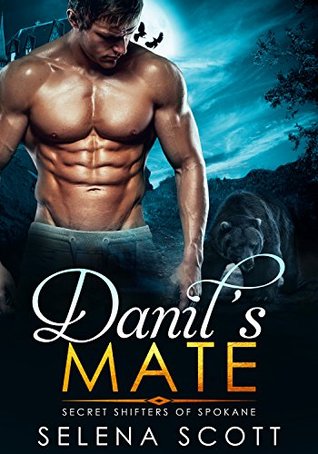 If the first story in the Secret Shifters of Spokane series is any indication, this is going to be an extremely interesting series.  Danil’s Mate sets up the series very well.  The world building is not overwhelming as needed information is given along the way, usually within the dialogue.  Pandora is an intelligent, extremely talented investigative reporter who has been on the trail of illegal activity by one corporation for some time now.  She knows how to work the case and people, learning at the knee of her deceased father who was a private investigator.  She knows what she’s doing, isn’t afraid of the danger and isn’t one bit shy of using her beauty, sex appeal and charm to get her own way or needed information.  Trouble is, that’s not going to work with Danil – in him she’s met her match and her mate.

Danil is the youngest brother in a family of bear shifters who fled their homeland to America in search of a new start and safety from those who would pursue them.  His interest is caught the first time he saw Dora using her charms to get herself out of trouble, but then she started showing up in places she had no business being… like at his parent’s home.  Her crazy excuses also catch his attention and the chase is on.  He knows she’s someone special for him and he’s not backing down or giving up.  Dora is his, she just may not know it yet.

Danil’s Mate is an intriguing story, sexy moments definitely, but it’s the mystery, the not really being certain exactly where we’re headed in this story that captures the imagination.  I adore Danil’s parents, they are simply too cool and adorable.  And I’m pretty sure we’re going to be seeing more of their loving antics throughout this series.  His brothers are distinct in their personalities, and I’m looking forward to getting to understand them better as well.  The mystery and the reveal of what they’re facing is horrific.  And while it follows some shifter lore, it definitely stands out as something that has no place within this world either.  There is a gentle tug towards the next story in the series as well.  I enjoyed my time in Danil and Dora’s world.  Their romance while fast is believable, the interactions of family falls naturally within the story.  This first story did what it was supposed to – it made me want to know and understand more – and that is the kind of series beginning that I enjoy most.

I’d recommend this story and the entire series to any Paranormal Romance or Shifter Romance reader who enjoys a bit of mystery, a touch of danger, interesting secondary characters who you know will have their own stories told, a believable main couple and a story line that draws you in with the need to know more.