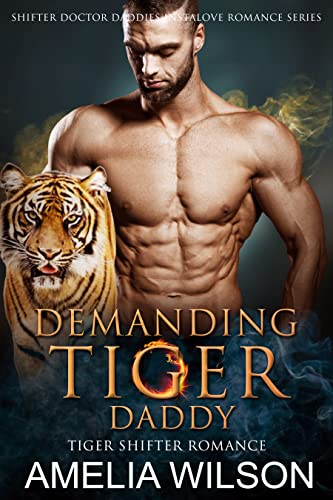 He’s not good for me.

The mysterious doctor doesn’t reveal his secrets to me. Instead, he lures me into the darkness where he takes me over, using his hands to mark what’s rightfully his. I belong to him in every way, I can’t deny that. Yet I also can’t deny how hard it is to accept the danger that comes with him.

He’s running from his past. He’s trying to outlive the peril he has encountered. The more he tries to hide that from me, the more I want to help. I told him I’m his little girl and I mean it. Little girls can be just as fierce as their Daddies. I’m more than capable of fighting back.

And I’ll defend my Daddy with my life.

Demanding Tiger Daddy is the fifth title in the Shifter Doctor Daddies Instalove Romance series… and it is hot, hot, hot.  If you can’t tell from the title there is a definite Dom/Sub relationship in this story – simply be aware, not everyone likes to be surprised.

Sia and Josh have a sizzling relationship almost from the very beginning.  Only trouble is that Sia’s best friend is Josh’s ex… and she’s made Sia promise to stay clear of the man who hurt her friend so badly.  But fate and chemistry have different plans in mind for this couple.  Not to mention that some serious danger is following on Josh’s heels straight to Sia’s location.