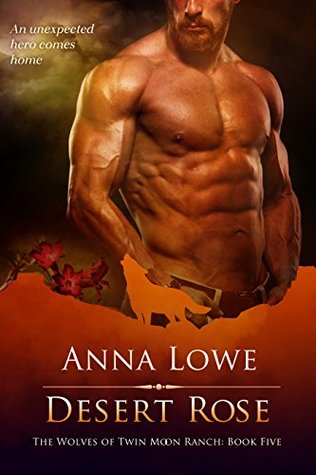 Axel Waldermann’s days in paradise are numbered, and he knows it. The last thing this reluctant hero needs is temptation in the form of a curvy she-wolf. One step too close, one kiss too many, and he’ll shatter the fragile alliance between his shifter clan and the powerful wolves of Twin Moon pack. But with destiny whispering in his ears and desire pumping through his veins, how can he resist?

Every local girl has her sights set on Axel, the most eligible bachelor in town. So what chance does an unassuming girl like Beth Carter have? When a deadly enemy lures Axel into the fight of his life, Beth will have to test her limits and believe not just in love, but in herself. Can this desert rose become a heroine and win her destined mate?

There’s more than meets the eye on Twin Moon Ranch, home to a pack of shapeshifting wolves willing to battle for life and love.

Axel is facing a long recovery after he and his pack helped the Twin Moon pack take down a Hellhound and send it back where it came from.  Unfortunately  a Javelina shifter can be injured just as easily as a wolf, boars  hold no special magic just strength.  For the moment, Axel is still unconscious and dreaming of the angel whose voice he hears talking to him.  When he discovers that his angel is in fact the cute librarian of the pack his hopes rise and fall quickly.  Yes, she’s real and interested, but he’s not one to set down roots and she’s a member of the pack that’s helping him recover.  In his  mind the future doesn’t look promising, but he’ll hold on to every second he can spend with Beth before he’s forced to leave the ranch.

Neither Beth or Axel ever believed they’d find their mate.  Axel because of his kind’s nomadic ways.  Beth because she didn’t fit the cute girl description that most guys went for.  She’s a bit nerdy, a bit shy and definitely has more curves.  She’d thought she’d be somewhat content tending to the library, and reading to the pack’s children until Axel came into her life.  She doesn’t know what he sees in her, but she’s so glad he does.  When danger lands in their territory once again, Beth will show her true colors.  You don’t mess with this girl’s mate, not unless you want your butt kicked.

I really enjoyed this couple.  There were more than a few tears shed, laughter, emotions running high throughout their story.  We don’t all fit into certain molds, and Axel and Beth proved to themselves and everyone else that it’s what is in the heart that truly matters.

If you love Shifter Romance then Desert Rose and this series should be on your reading list.  An interesting story line, engaging couples and some of the most intense, sometimes crazy secondary characters you’re likely to fin.  I would definitely recommend The Wolves of Twin Moon Ranch.