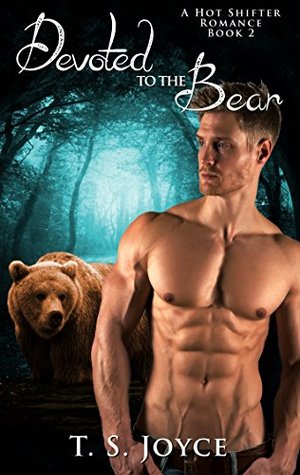 Hannah Michaels must find her way among the bear shifters she’s promised to help Benson Riker lead. And he’s going to show her just how hot being mated to the alpha can be.

When a chance encounter from her past shows her she is still being hunted by the man she put behind bars, she must decide whether to put her new clan in jeopardy by seeking sanctuary, or to strike out on her own and save herself.

Weathering treacherous enemies, blurred loyalty lines and heart pounding first love, Hannah will strive to prove her devotion to Riker and his bear shifters. If she can walk the fine line between surviving her new clan’s primal sides and the vengeful humans of her past, she just might find her place in Bear Valley.

Hot, Alpha Shifter lovin’ his mate in this story, as always with Shifters – so this is an 18+ story.

Read on for my thoughts on Devoted To The Bear.

We revisit Hannah and Riker’s lives together in the second story in the Bear Valley Shifters series.  While they have effectively stopped one aspect of the danger chasing Hannah, life isn’t going to be smooth sailing for this couple just yet.  There is another threat to Hannah, one loose thread from those panicked days of being on the run… and this one is going to get ugly.

With Riker and his sister, Jenny firmly on her side, Hannah is beginning to settle into the shifter clan community.  Those who now see Merit’s actions as totally despicable have welcomed Hannah as their Alpha’s chosen mate.  She is working alongside of her clan mates by day and deepening her relationship with Riker after hours.  Life is good at the moment.  Yet, the sense of unease is strong for both of them and soon betrayal, danger and a life threatening situation will be hot on their heels once again.

I don’t often use this phrase, but I found Devoted To The Bear to be a very gripping, suspense filled story.  Of course we suspect what is being done by that one loose thread from Hannah’s past – but seeing that situation being played out was tense and realistic.  Hannah is the thinking woman’s heroine – she doesn’t totally panic, she uses her brains when in danger and does what she can to lead her mate and clan-mates to her with logic.  Of course she’s terrified but she doesn’t fall apart waiting for her Alpha man to come rescue her – she fights in the ways that she can, and that made her a much stronger character in my eyes in this second story.  She’s more invested in the life she and Riker are creating, in the people she’s come to know and trust – for them she is willing to fight.

I really enjoyed this continuation of Hanna and Riker’s story – and there were a few “breadcrumbs” that lead me to believe the next story is going to be just as strong, if not stronger because of their tightly woven bond.

If you love Shifter Romance, this is a series you will want to consider.  Yes, it’s been around for a few years but if, like me, you missed it the first time around – it’s never too late for a great romance.