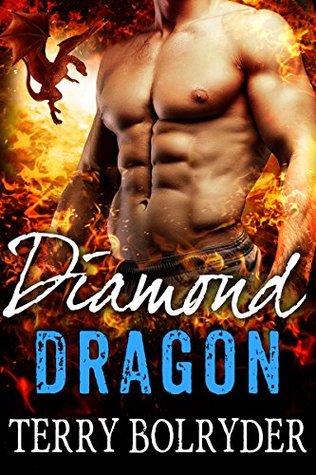 Alistair Brighton, the diamond dragon, needs to escape. Imprisoned, chained and used for experiments, his only hope for escape is Bridget, the quiet human woman who brings him his meals (and intrigues him for mysterious reasons). But Bridget isn’t sure she wants to let a dangerous dragon out of his cage, and Alistair can’t promise he was ever much of a hero.

Bridget is running out of options. While seeking info on a missing friend, she fell in among vicious shifters who see humans as slaves or worse. Every day brings more danger, mainly from the gross alpha wolf who has decided she’s his property, but also from the beautiful prisoner in the basement, who claims to be a dragon and draws her in with pretty promises but pushes her away with the ominous glint in his eyes.

But when Bridget’s back is literally to the wall, Alistair surprises them both by coming to the rescue. Now Bridget’s on the run with a dragon, and isn’t sure what’s more dangerous: his powers or his steamy, insistent kisses. And Alistair is realizing that for the right person, he might just be a hero after all.

Alistair, the Diamond Dragon, was imprisoned.  Not only by the collar that shackled his dragon powers, but also within these castle walls, in this dungeon, in this iron-barred cell.  The only moments outside of his cell were when he was taken to the scientists to draw more of his blood.  Dragon blood was powerful, and he had a good idea of at least one purpose they were using it for.  The rest of the time he was left alone with his thoughts, the mangy cat he’d befriended and Bridget, the human who brought him his food allotment every day.  While he could read some thoughts, Bridget had kept her silence as much as a human could.  Yet, they’d worked on a somewhat friendly encounter – after all it wasn’t she who had him imprisoned.  She had come here searching for her missing friend, Lana, and ended up doing the menial things around the place… things to lowly for the other shifters around.  They might have continued on the same way every day except for one over zealous wolf shifter with his eye on the human for sport.  While Alistair would be the first to admit that all his life he’d been rather selfish and self-contained – seeing Bridget attacked loosened something within him and on him as his collar weakened enough to allow his dragon powers to emerge to fight the wolf – and to escape with Bridget and a cat named Scrangey.

Moments after their escape Bridget hesitated in leaving with Alistair.  He’d promised to help her find Lana, but she trusted no one.  She’d demanded proof of his promise, she’d demanded his diamond ring not knowing what the ring meant to Alistair.  He handed it over and they set out on their flight to freedom and in search of Lana… not knowing the true meaning behind a human wearing the ring of a gem dragon.

They will face dangers together, slowly allow the attraction to grow into something, and perhaps begin to love each other – even if that particular word wasn’t used.  Alistair has never felt this way about a woman before.  Never.  Her safety, her happiness, even her reactions to other males means more to him than he ever expected and it totally confused him.  He was one clueless dragon when it came to emotions.  One day soon, his inability to more clearly define what he’s feeling for Bridget will come back to bit him on the rear – when he almost loses his mate by his own foolish words.

The danger is ramping up in Diamond Dragon, the fighting more fierce and the stakes are becoming higher.  Dom, the Amethyst Dragon has been awakened but not collared in order to help in the fight to protect humans at any cost.  Dom’s help will be essential in finding not only Alistair but Lana as well.

I completely enjoyed my time in Diamond Dragon.  Alistair is so freakin’ clueless as to how his inability to say the words is affecting Bridget.  And Bridget’s low opinion of herself isn’t allowing her to read between the lines of what he is saying.  They might be mates but they needed a stern talking to at some points.  We didn’t see the Emerald Dragon this time around, although he was briefly mentioned.   But all the dragons and their mates are also in this story, and it’s always enjoyable to catch up and see what’s happening with them now.  The danger is increasing, and the groundwork for the next book, the Amethyst Dragon has been laid – now, it’s time to go read it.