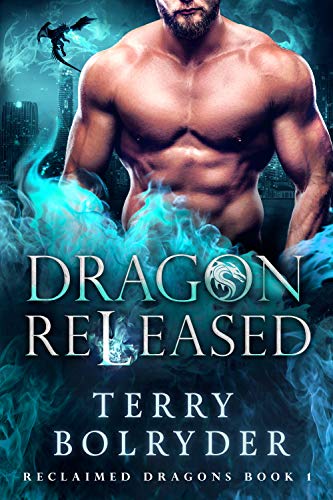 I am always excited to begin a new series set in Ms. Bolryder’s dragon connecting world.  ‘Dragon Released‘, is the first title in the ‘Reclaimed Dragons‘ series, and definitely shares a connection with the ‘Wings, Wands & Soul Bonds‘ series.  All of these series interconnect in so many ways that you’ll never be certain just who you might run into.  We will, briefly, run into an old dragon friend – and what good memories he brought back.  That is why I so often suggest reading long connecting series in order – you never know when you might see an old book friend once again.

Dallin is a unique dragon shifter for he is a hybrid, part dragon, part fae, or at least that was what the experiment on him was supposed to bring out in him.  But so far he’s successfully fought against that possibility for his hatred of the Light Fae, of how they imprisoned him, his friends, and dragons across their world have become so overpowering to the point of dismissing anything or anyone that has Fae blood.  Unfortunately, that includes his friends, his mentors… and his mate, his soul bond for she is a soon to manifest Fae who is under his protection.  And he will be torn by the cry of his dragon stating that Jo is his mate when… she’s about to become a full Fae.

Jo is goodness.  It’s that simple.  She is a delight, loves her career as an online chef with her specialty of baking delicious treats.  Jo sees the good in everything, everyone and believing in this silliness just isn’t possible.  She wasn’t certain if she should be amused or angry at the presentation package she received about becoming something called a beacon (whatever the heck that was).  Several times she was tempted to just toss it but something kept holding her back.  So she really shouldn’t have been surprised (after all, she’d been told in that paperwork to expect one) when her protector showed up in all of his dragon glory.

Dallin is dark.  There is a good reason for him to have that personality, that life perspective knowing what has been done to him.  Yet, I will admit there were times when I wanted to give him a good smack upside the head or a stern talking to.  His inner dialogue with himself/his dragon over how horrible a person he is, how he can never be redeemed, how hatred is the only emotion he can feel became repetitive.  In my opinion, that conflict went on a bit too long.  Again, that’s my opinion but it did not take anything away from how much I enjoyed the story or loved the characters (well, aside from the obvious villains).  Readers are allowed to have those opinions since we all bring individuality to every single book we read which is unique to us alone.

The sexual chemistry and tensions were high, the danger obvious enough to feel it, wait for it to drop, and the secondary characters were given just enough time in the spotlight for me to be looking forward to their stories being told.  In all, I had a blast with ‘Dragon Released‘ and if you love Paranormal Romance or Shifter Romance then you’ll be wanting to add this series to your collection.