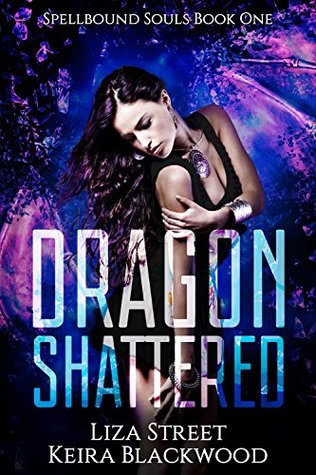 Ariana believed she’d been lucky to find love once. No other man could compare to her mate, and his memory lived strong even after his tragic death.

Whitesong Security became her way of continuing his legacy, making the world a better place through donating money to deserving organizations, and fighting for good causes.

Silent battles rage among the shifter elite over artifacts from the war that claimed Ariana’s mate. To manage the increasing demands for security, she is forced to take a partner.

Ariana must choose between three skilled applicants, but each one calls to her dragon and stirs emotions long forgotten.

It’s only a matter of time before they win her heart.

Titles in the Shattered Souls series include:  Dragon Shattered –

When the talents of two remarkable authors are combined to bring us a trilogy like Shattered Souls you should expect something amazing.  I’ve followed both Keira Blackwood and Liza Street for some time now.  Both bring well-defined stories, interesting characters and sizzling sexy moments to their readers through their various series.  I’ll be frank and say that I hesitated before picking up Dragon Shattered.  I am not a reverse harem fan.  I’ll be quite honest about that, everyone has their own preferred tastes so there is nothing wrong with liking or not liking a particular style of story.  I’m more of a one-woman, one-man type of reader.  I’ve tried them in the past and liked them to a point, but not enough to read them regularly.  Yet I know and trust the writing of Ms. Blackwood and Ms. Street – so I took the chance, and I’m very glad that I did.

Dragon Shattered will ignite your imagination from the very beginning.  In fact, it’s the prologue to this story that gave me the first feeling of I’m going to be okay with this story. I’ll let you discover that moment for yourself.  Ariana, Taylor, Slade, and Quentin make up an intriguing group.  Each brings something unique and completely their own into the mix… yet together they are formidable.

As the beginning story in this trilogy, Dragon Shattered sets the stage with the start of threads that will be woven throughout this trilogy.  This is a Happy For Now ending, not a cliffhanger, but you do know that there is more to come.  I would not call those things loose ends, but anticipation for what comes next.  There are clues scattered about that all is not what it appears on the surface, and again, I’ll let you find those for yourself.  While there are definitely sensuous, sizzling moments, there are also loving, caring interactions as well.  These individuals work as a unit, together they are stronger and somehow exactly right with each other.  I’m looking forward to seeing how their relationships grow and develop over the rest of this trilogy.

In Dragon Shattered you will find strong characters that you’ll like as individuals, an intriguing plot, danger to be faced and those sizzling moments we all look forward to… and a satisfied sense of completion to one part while anticipating learning more of their story.  An interesting concept, well played and one that will keep your attention throughout this story and beyond.  I’d highly recommend this story and look forward to the next story in the Shattered Souls series by Keira Blackwood and Liza Street.  Well done, ladies.