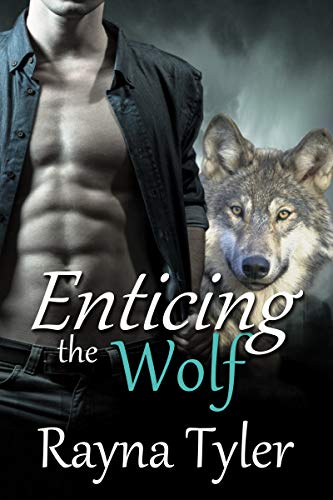 ‘Enticing the Wolf‘ is the fourth title in the ‘Seneca Falls Shifters‘ series, and big brother Reese has finally met his match… and his mate.  A mate that wants no parts of a former military man, and is determined to ignore the mating bond developing between them.  It’s going to take a large dose of danger, some help from friends and family, and maybe finally seeing that this man truly sees her just as she is… and likes what he sees without needing to change one thing about her (unlike her lifelong military, judgmental father).

I had such fun with Reese and Jac’s romance.  She is as determined and stubborn about refusing to acknowledge that Reese is her mate as her mate is equally determined and stubborn enough to find ways to show Jac exactly what they could have… if she’d only give them a chance.  Watching their banter, the discoveries about personalities, and ‘hot button’ topics each have was a roller coaster ride of laughter, frustration, and pure enjoyment.  I liked them both equally which was a lot of the fun and frustration of watching them sorta fumble around the “I refuse to be your mate” stance of Jac.

But… with some help from friends and family, plus a dangerous situation at the resort they will have the chance to see, really see each other in a different light.  I had suspected who the actual lead bad guy was early on, yet the build-up to that reveal was done so smoothly that I almost forgot about those questions I had about this person.  Do you know that one character you really want to either shake some sense into or sit down for a stern talking to?  Yeah.  For me that was Jac.  Her father really did a number on her mindset, and it will take a very compassionate, willing to do anything for his mate kind of guy to get her to see that not all men would treat her so badly… especially not her mate.  In all, I had a great time with ‘Enticing the Wolf‘ and I’m about to go pick up ‘Teasing the Tiger‘.  I’m not really certain how long this series will last – but I’m certainly enjoying every moment in this world for as long as it does.