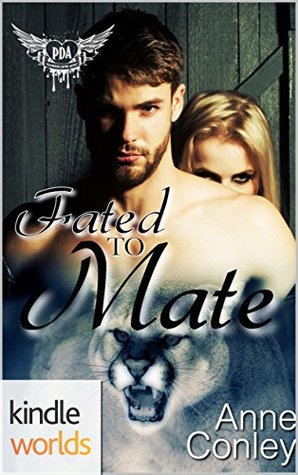 Leave it to Geri Wilder and Chase’s beloved grandmother, two matchmakers at heart, to put two young lovers on the right path to each other… finally.  The community that Chase grew up in has rather out-dated, unrealistic demands on the various shifters who live there.  No alpha but a mayor, fated mated only and never, ever mated with a human.  Which put Chase, a cougar shifter and son of the current mayor, and his love for a very human Kelli in dire straits.  They loved each other as teens, would have bonded long ago except for his father’s dictates that Chase mate with only another shifter.  Kelli eventually gave up and moved away to try to find a life for herself away from the man she’d love forever.  Fate, one feisty grandmother and Geri Wilder had other plans for them.

Fated to Mate is a fun, sexy Shifter Romance where two fated mates are forced to walk away from each other for years, enduring sadness, loneliness and bad romantic choices.  It’s very easy to see the villain in this romance, one stubborn, arrogant, “it’s my way or the highway” father and leader of this community.  It’s equally easy to dislike Chase’s father for all of the above reasons – and his failure to see that his son wasn’t happy and that didn’t matter one bit to him.

Kelli and Chase are good together.  Sexy, still deeply in love and just a bit desperate to find a way back to each other.  Thanks to some matchmaking and an old legend there is a way but first danger has to be faced and choices made.  I enjoyed Fated to Mate and I’ll be looking for the stories of two other young men mentioned in this story.  I’d recommend this one for any Paranormal Romance or Shifter Romance reader who enjoys a good story, lively action and steamy, sexy moments.