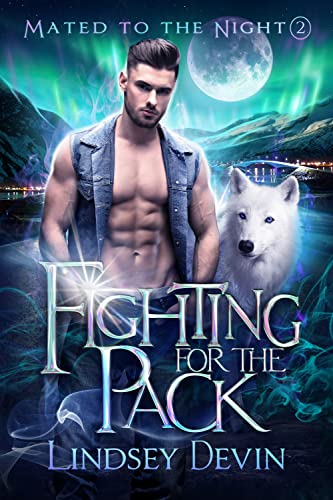 Falling in love with the enemy alpha could destroy us…

At first, I thought being kidnapped by the enemy alpha was bad. But since falling for Night, I’ve discovered what it’s like to be wanted and part of a pack.

Now I’ve been kidnapped again—this time, by Troy, my old pack’s alpha. Not only is he a bully who wants to torture me, he’s also determined to destroy Night and his pack.

Troy’s plan is to claim me for himself, but he doesn’t realize that I’m already mated to Night. And the longer we’re apart, the weaker both of us become.

When Troy discovers the truth, his fangs will come out. Only he doesn’t know that there’s a wolf inside me, desperate to show itself. Or that it’s clawing for a fight…

Fighting for the Pack is the second title in the Mated to the Night series.  This is a series that I would strongly suggest reading in order.  I didn’t, and while I wasn’t lost as some important details were mentioned I would have benefited from reading the previous title.

Night and Bryn’s story is intense on many levels.  And I enjoyed their romance, to a point.  While not every author’s shifter lore is going to be the exact same, there are things within that world that I expect.  For that personal reason alone I’m simply going to say that this is a well-written story with touches of friendship, loyalty, danger, betrayal, and the sizzle that only happens with fated mates.