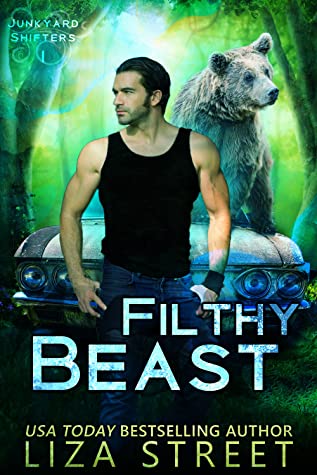 ‘Filthy Beast’ kicks off the ‘Junkyard Shifters’ series with a tale that is explosive and sexy in the same heartbeat – and your heart will be beating faster as you enter into Lena and Carter’s world where only the strong -and the smart- survive.

If you’re a fan of Shifter Romance then somewhere along the line you’ve read of shifter prisons, the place where the really bad guys go if they aren’t outright killed for their actions.  Yet.  What if shifter prison was really worse in some ways than we thought?  What if there are no guards, simple food deliveries, and a magical barrier to keep them in and the rest of the world unaware?  Just out of control, mean, nasty, bad guys, eventually killing each other for dominance, right?  Well… maybe not.  And that is where both ‘Filthy Beast’ and the premise of ‘Junkyard Shifters’ becomes, to me, a bit fascinating in the overlying, carefully woven storyline, plot, and characters we’ll meet.  Not everything is as it appears, not everyone is a true bad guy – or not in the sense that we accept as the ‘villain’.

The cover description gives you the basics, enough to pick up ‘Filthy Beast’, what it doesn’t show are the emotional reasons behind why Carter and Lena are there in the first place.  Or the very real danger they are both in from not only other, let’s call them inmates, but from shifters paid to harm Lena at the directive of a very nasty piece of work who should be the one in prison, not Lena.  Carter is, at the heart, a good guy who has suffered from his brother’s death, an event that has left Carter unable to control his rage or his actions.  Neither is weak, neither is sick, neither really should be in this prison – yet, both will find their mate, find answers, and eventually escape.  But not before they go through some intriguing twists, turns, and the unexpected in the process of finding their mate and simply surviving – and taking down the real bad guy, eventually.

I’ve said more than I normally do, yet I do find this story and the premise of the series to be rather, well, in the words of my favorite Vulcan, “Fascinating.”  We’ll meet some truly interesting characters, some who may have stories to come (we’ll just have to wait and see), a desperate couple for different reasons finding the one, the mate who completes them in most unusual circumstances, some definitely sizzling sexy times, and two people to truly like, respect, and want only good things to happen in their future.  So, yeah.  I was hooked on this one and I’ll definitely be following the adventures of any and all ‘Junkyard Shifters’.