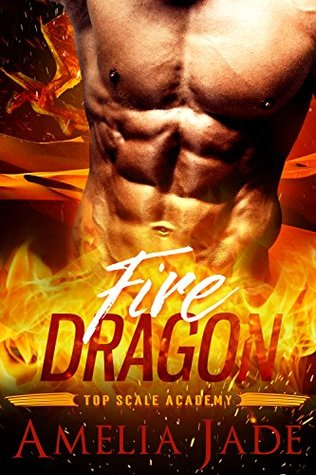 When word reaches Top Scale Academy that the borders of Cadia have been breached, Ezequiel “Zeke” Hawthorn and his fellow dragon cadets are dispatched to look for any intruders. Ready for just about anything, Zeke is caught off guard when he finds that the “intruder” is a lost human who has no idea how she got there. But what the beautiful new stranger in his life does know is much more alarming.

Amber Klose is a structural engineer for a leading petroleum company, working on its newest pipeline. When a routine construction site check goes horribly awry, she finds herself alone, deep inside shifter territory with no way out. Her only hope of survival may just lie in the hands of a powerful and sexy dragon shifter.

The stakes rise as the mystery begins to unravel, and Zeke will be forced to use all the tools in his formidable arsenal to protect the woman he loves. But in the end, it may be her willingness to do anything for him that saves the day. Can the pair make it through the fire unharmed, or will their bond break when the heat is on?

Titles in the Top Scale Academy series include:  Frost Dragon – Fire Dragon – Electro Dragon — connecting series with Dragons of Cadia and Base Camp Bears.  An over arching story line connects these three series as the danger and events in Cadia move forward.

Amber was at the job site base doing an inspection, one where she wasn’t supposed to be but the regular guy fell ill.  Since she’s one of the engineers who designed the pipeline that is suppose to skirt, never cross, the border of Cadia when she sees something not right on a map of the pipeline in the sleazy manager’s office… she starts asking questions, the wrong questions.  When she, her escort, the manager and helicopter pilot take an impromptu flight to the work sight, her suspicion are confirmed although she’s trying to stay cool and not let on.  Unfortunately, the next thing Amber remembers is waking up alone, in the middle of the forest, probably in Cadia territory and left for dead.

Zeke and his friends and fellow cadets Asher and Dom are doing an actual border patrol with instructions to keep a sharp eye out and assist the Guardians or deal with any issues on their own if they must.  Quite an assignment, and each are eager to do their best on a prelude to what their future holds as Guardians.  Zeke’s sharp eyes spot Amber in the forest and heads her way to deal with what appears to be a human in Cadia territory.  When he hears her story of kidnapping, the changed blueprints and the pipeline where it obviously shouldn’t be, Zeke decides to deliver her to Guardian Headquarters to let those in authority deal with the problem.  It won’t be long before Zeke and Amber discover just how important this problem will become, and how far reaching on both sides of the border.

Fire Dragon brings all of the characters from Frost Dragon together again and the overlying story deepens as we begin to see more of the dangers facing Cadia from within.  Zeke and Amber have a connection almost from the beginning.  However, she cannot stay in Cadia, and other plots are spinning around her.  When Zeke is given the assignment to return her to her company’s base camp… well, the real fast paced action of this story begins to take off.  Intense, gripping and seductive – this is a story that you need to experience first hand as to go much deeper would be giving away spoilers.

I liked Amber from the start.  She’s tough, smart and a straight talker.  She knows there’s more going on and she is brave enough to face what the future holds with Zeke… if they survive.  Zeke is a charming, honorable man and his protectiveness over Amber is obvious from the start.  He will do what is necessary to save his mate.

The action and the romance heats up in this second story of the Top Scale Academy.  I would definitely recommend this story and this series to any Shifter Romance reader.  A good, solid story, likable characters and an underlying tension that practically leaps off the page.  Yeah, this is a series to follow from this one and beyond to the next connecting series as well.