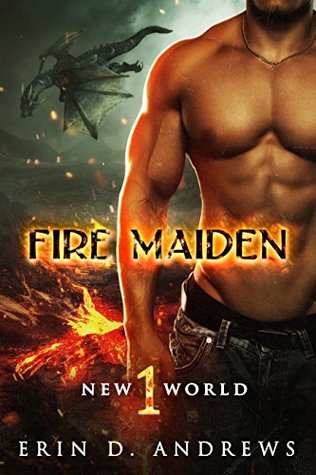 When Violet hires Frank to be her accountant, everything clicks. They hit it off, but Violet convinces herself that she only needs him for work and nothing else. After she decided to date him, she’s surprised by how easy it is – until she learns one small detail – he’s a dragon.

How can she love someone who is a dragon, a creature she didn’t even know was real? Will she be able to accept Frank for who he is?

Fire Maiden is an intriguing start to a new series.  I’ll mention upfront that some may consider this somewhat of a cliffhanger story, in some ways I’d agree in others not so much.  You see, the main story of Frank and Violet does come to it’s conclusion, it also continues on into the next story in the series along with another new couple.  So in that sense the main story in one book reaches it’s ending but the overall story continues on… now I call that a series not a cliffhanger.  But that’s me… we all have our own personal description of what we feel is a cliffhanger story.  Yet because of the overlapping story lines, I would strongly suggest reading this series in order.

Fire Maiden also introduces some new, fascinating shifter lore, which I always enjoy adding new pieces to the puzzle that makes up the shifter world.  Frank and Violet make an interesting couple.  He’s a 300 plus year old dragon, she’s human with no clue of dragon’s existence.  Violet does however have a friend who in a way put Frank and Violet together in a professional manner… maybe hoping for more to happen between.  Did she ever get her wish.  Claire will have her story told in the next book, Free Spirit, so you’ll get a bit of background on her in this first story as well.

There were times when Violet was extremely frustrating, I do admit to feeling very annoyed with her at times.  And you’ll understand that feeling when you pick up this story for your own reading pleasure.  Frank knows that Violet will be a special woman in his life, but he makes mistakes and there are misunderstandings so that puts some tension on the growing relationship.  Throughout their romance we’ll feel the tensions underneath the surface of strangers asking questions in places they shouldn’t be, strange people showing up where they have no business.  This will be the thread that is woven throughout the series, and we’re getting the first taste of it now.

Overall I enjoyed Fire Maiden and will pick up the next story shortly.  I do admit that the Kindle formatting of double spaced lines is a distraction for me.  It never stops me from reading a book, but I do sigh on the first page of any book with that formatting when I begin the story.  I don’t think I’m alone in that reaction.  I would recommend this story, the series holds promise and I like the secondary characters that we’re sure to see more of as the series continues.