Posted May 18, 2018 by Marsha in Shifter Connected, Shifter Series / 0 Comments 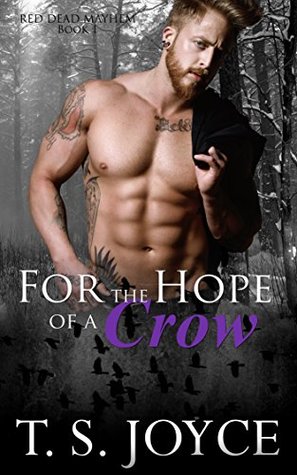 Ramsey Hunt is caught in a spiral no one can save him from, and he’s taking his entire Clan of crow shifters down with him. A broken mating bond has him going insane, and all he can do is try to hold onto his Alpha position as long as possible. But when a spirited beauty comes waltzing into his MC’s clubhouse demanding an audience with him, he can’t help but think he’s dreaming her up. She’s got paperwork saying he’s her mate, and this shifter has one serious stubborn streak in her. All he wants to do is go insane in peace, but she isn’t having it. And now the real work begins. He’s got to sever one mating bond completely if he wants a shot at survival. And if this crazy plan works, he might just have a second shot at happiness too.

Vina wants a crow. She doesn’t care who they are, as long as their shifter animal is a crow. They mate for life and she’s tired of being pushed around by the men she dates. So when a crow comes up on the shifter matchmaking service she applied for three years ago, she has a good feeling her stars are about to change. That is, until she meets Ramsey. The half-crazed Alpha of the biggest, baddest Clan of crow shifters in existence isn’t going to make pairing up easy. And the more Vina gets to know him, the more she thinks it wasn’t him who signed up for a mate after all.

And now Vina has two choices—cut and run from the storm coming for the Red Dead Mayhem Clan, or dig her heels in and rip that old mating bond out of Ramsey. Up until now, no one has appreciated her, but what if…just what if…she could be the one to save the crows?

Titles in the Red Dead Mayhem series include:  For the Hope of a Crow – For the Blood of a Crow –

What an amazing, heartbreaking, heart uplifting way to start off the Red Dead Mayhem series.  I knew in my head that Ramsey’s story was going to be a heart breaker – but I was not expecting this level of emotions, tensions and just plain ol’ love.  And, if like me, you search for that ten-ten (10-10) reference in every T.S. Joyce book, it’s there early on.  *grin*

Ramsey was going out of control crazy from his broken mate bond with Tenlee.  Not that Ten ever was his true mate, but his crow thought she was.  Even now that she’s settled in with her true mate, Kurt from the Two Claws, his crow is still believing that she belongs with them.  That broken bond, to his crow at least, is driving Ramsey out of his mind – and through the Clan connection, he’s taking his entire crow clan down with him.  The in-fighting has already started in their MC, others jockeying for the guts and the backing to challenge Ramsey for the Alpha position has already begun.  Yet Ramsey is holding on, barely, to his sanity and his position, but really he’s not sure for how much longer he can do that.  His crow is already sleep flying back to Tenlee at every chance he gets, no matter how many times gunshots just barely miss his heart.  What Ramsey doesn’t know is that his hope is on the way in the form of one determined lady who on the surface is the opposite of what he thinks he needs.  One woman that can change the future for one crow and his clan, if he lets her.

Vina, a shifter, is tired of being alone, of being cheated on, of being left behind, of never being good enough to stick with for life.  She’s taken the matter into her own hands now and is looking for one specific shifter animal to form a bond with.  She knows that crows mate for life, she’s just been matched up, through a matchmaking service, with one badass crow.  Now comes the part where she convinces him that they’ll have the perfect connection together.  She certainly wasn’t expecting the situation she walked into or the man who stole her breath at first glance.  It’s obvious that Ramsey doesn’t want her either, but it’s also obvious that he’s in great pain and danger from a broken mate bond.  Refusing to totally give up, Vina will stick to Ramsey for as long as she can.  Maybe, in time, he’ll realize what a great match they could make.  There is one thing she’s sure of, it’s that she will be the one to save this crow and maybe the entire clan – if he will just let her.

For the Hope of a Crow is devastatingly raw in emotional impact.  Even knowing what happened with the Two Claws, it’s not easy to ignore Ramsey’s pain and confusion.  My heart ached for him when he spoke of his “ghosts”.  Just simply raw emotions flow from this story.  When we first meet Vina she comes off as rather prissy, but that does not last long.  This girl is a rock star, she just doesn’t know it yet – and do not mess with her rare animal, don’t do it, I’m just sayin’.  There is a major development in this story that is huge.  I cannot wait to see how that will play out in the coming stories.  Y’all know that my favorite of all time works from T.S. Joyce is her connecting sets of series that make up Damon’s Mountains.  I’m going on the record right now that I believe the connections between Outlaw Shifters and Red Dead Mayhem, and what other connections may hopefully come will be my second favorite set of stories… and I cannot wait to see where she tales us.  These series are raw and gritty, full of hard living and exceptional characters.  I just now finished this story and cannot wait to get my hands on For the Blood of a Crow in June.

If you’re looking for a series that will keep your attention, give you some wounded characters to root for, dangerous situations, over the top steamy moments and a really, really good story then you’ll want to check out For the Hope of a Crow (and maybe go back and read Outlaw Shifters if you haven’t yet).  I would highly recommend this story and series to any Paranormal Romance or Shifter Romance reader who loves a good story, relatable characters, secondary characters who make the story come alive while waiting for their moment in the spotlight and a romance that is just meant to be.