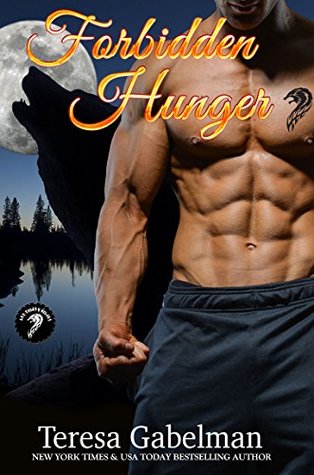 A shifter without a pack, Janna Lawson goes in search of the man who her mother died trying to protect.

What she finds is Garrett Foster, a man who has the power to decide her fate and causes a hunger inside her that is forbidden to them both.

Although Forbidden Hunger is a rather short story, it certainly packs a powerful punch.  Janna is on a mission.  To find one man, one coward of a man and pass on a message from her dead mother… and to give the jerk a very large piece of her angry mind.  She didn’t really see what would happen beyond that  moment.  What she got was a lot more than she expected.

Garrett wasn’t expecting this tiny woman to floor him as much as she did.  His mate, and here with vengeance in her eyes and anger in her heart… and danger on her trail.  Somehow he’d have to get this little she-wolf to let him in, to allow her wolf the freedom she needs and to stay to make his life complete.  Right after he tears apart the danger that’s after her, and his pack.

I enjoyed this world.  Yes, it’s short,, but it’s a solid story with very interesting characters.  We’ll be seeing them again in the rest of the series.  Garrett and Janna are two proud, stubborn people who have a connection that cannot be denied.  Hot and sexy, sincere and seductive.   These two are one hot headed couple and I liked them both very much.

Looking for a quick read?  Then check out Forbidden Hunger and the rest of this series.  Likable characters, sexy moments, touches of danger and definitely characters you’ll want to learn more about.  I’d recommend this one for any Paranormal Romance or Shifter Romance reader.  They may have been out for a while now, but I enjoyed my time in this world.  Stories don’t grow old, they still hold their passion for years beyond publication dates.  Now I’m off to pick up Forbidden Seduction, the next one in this series.

I read this title through my Kindle Unlimited subscription.  Best ten bucks I spend each month.