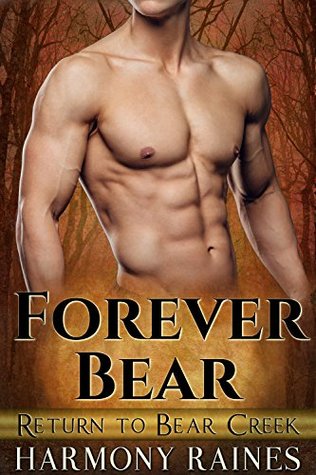 Teagan’s mom never got over her mate leaving after a brief relationship. Unable to cope, she handed her baby over to foster care.

A part of Teagan always felt abandoned, and yet she never let herself believe she was unworthy of love. Yet her childhood and all the unanswered questions she has stored up, still haunt her.

Then bear shifter Cal walks into her life—OK, so maybe he doesn’t walk into her life. Cal saves her from drowning in a flooded creek and gives her the kiss of life. One of many, many, kisses if Cal has his way.

Cal senses her need to find answers. All he hopes is when Teagan finds them, she doesn’t think history will repeat itself. He is now, and will always be, her forever bear.

Teagan and Cal’s romance brings not only mates together, but also gives Teagan some closure, understanding and acceptance to her past.  Teagan has become a vital part of the Bear Creek community.  Her work as a journalist, then working with Carter and others at the newly formed newspaper has given her what she wants in a career – at least for now.  The help she gives at the brewery is also part of her friendship with Carter, Caroline, Fern, Theo and Walt, plus it gives her satisfaction to be part of the newest honey beer on the market.  She’s made friends and set down her own roots.  But as a former foster child she still has so many unanswered questions.  She’ll get those answers, and perhaps more than she ever expected in the explanations given.  Most important of all is that she’s found her mate in Cal, and his presence in her life makes everything she’s facing that much easier with him at  her side.

Cal is part of a large family with deep roots in Bear Creek.  He went away to work in the bigger city but when the promotion to fire chief went to an outsider he finally decided that home is where he is meant to be.  Who knew that helping to rescue a baby calf during a flash flood would lead him right to his mate.

Forever Bear is an entertaining, emotional story, one that touches on many important issues with care and understanding.  You’ll be hard pressed not to feel Teagan’s need to know what and why things happened as they did in her past.  Sometimes answers come from unexpected places, and watching this play out was at times intense and always emotional.

I enjoyed Teagan’s and Cal’s journey very much.  I believe any Paranormal Romance or Shifter Romance reader would enjoy this story and the entire series.  A believable story line (given they’re shifters), a likable main couple and recurring secondary characters we’ve already met and loved.