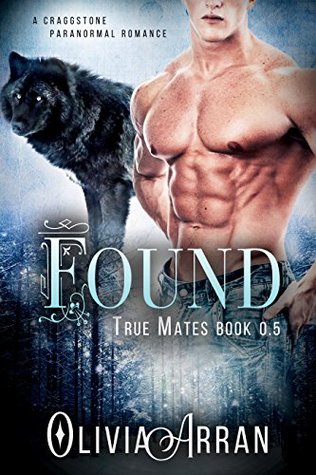 When Alpha Adam Colstone escapes to his winter cabin for some much needed solitude and relaxation, rescuing a voluptuous she-wolf from frostbite was definitely not part of his plan.

Waking up in the arms of a sizzling hot stranger, Claire Kendal thought she had to be dreaming…because not only is this man her saviour, he’s also her true mate. Adam is more than willing to put his heart, soul and body into proving to Claire that she’s not dreaming, but will it be enough to heal her of her amnesia?

Will Claire remember why she was running, before it’s too late…or will they run out of time?

Read on for my thoughts on Found.

(Note: although this title is available as a solo prequel now, originally it was included in the Christmas Bundle titled Shifters in the Snow… if you bought that bundle, you have this story.)

Claire was on the run, hunted down by an enemy who would go to any lengths to find her.  Wounded and badly bleeding, she is on the point of collapse when she gives out one final agonized cry and falls to the blood soaked snow.

Adan is spending time at his cabin deep in the forest.  He may be the Alpha of the Colstone pack, but the pressure is on for him to take a mate and produce the next generation.  The trouble is Adam knows his true mate is out there – he simply hasn’t found her yet.  And to take another would be unfaithful to his one fated mate.  Hearing the screech of a wounded female he races into the forest – only to find a badly wounded shifter, and stumbled upon his mate, at last.

Claire is so badly wounded that Adam fears for her life.  As he tenderly treats her wounds Claire will tell him of her desperate attempt to escape those who hunt her – even now, the danger is close to their door.  Adam and Claire will fight those that try to separate them, to the death.

In Found we have the story of Adam and Claire – parents to James, Alpha of the Colstone Pack in the first novel in this series, Promised.  And it is quickly obvious where James got his bravery, strength and sense of what is right for his pack from.

A short tale, told in alternating points of view, this is a beautiful, sexy and riveting tale of two people who believed they’d never find each other – and fighting every obstacle to be together.

If you enjoy Shifter Romance, Found is a delightful way to start the True Mates series – or if you’ve read it already, a fun look back to how it all started.  Either way, you’re in for a treat.

This story, along with 14 other Shifter Tales was, and still is available in the Shifters In the Snow Christmas Bundle – also available for the Kindle