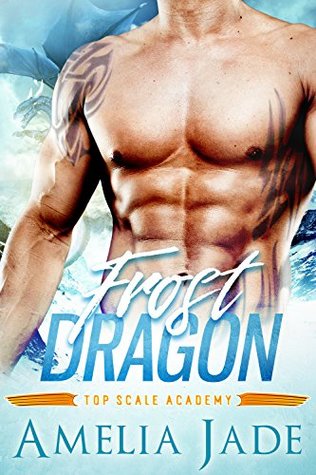 Dragon shifter Asher Owens has just been accepted to the prestigious Top Scale Academy. In a world where shifters are not born with the instinctual grace of their animals, it is a supreme honor. There he will learn how to fly gracefully, fight with his animal, and of course, how to use his breath weapon. If he passes, he could even become a Guardian, a protector of Cadia, his home. That is if he doesn’t get expelled for harboring an illegal human woman, who has managed to steal his heart in the process.

Quinn Bryant knew she wasn’t supposed to enter Cadia. It was shifter territory, and it was entirely possible that if she were caught she would never be seen again. But the opportunity to get that elusive picture of shifters interacting with each other was too tempting to pass up.

Now hunted and hiding out at the house of a mysterious dragon shifter, Quinn has come to realize she has been so very wrong about shifters, and one sexy Frost Dragon in particular. But when he discovers her true reason for being there, Quinn knows she can no longer stay.

Can she make it out of Cadia alive? Or will other forces prevent her and Asher from realizing the truth behind their blossoming romance?

Frost Dragon introduces us to a slightly different Shifter lore.  In this world Shifters have their own territory where all Shifters, of any type, live, work and protect their citizens and their borders.  There are two large cities in this area, Cadia the largest, and the somewhat rival Fenris the second largest city.  The two sides do not see eye to eye on much of anything and there is tension and more between them.  Humans are strongly discouraged from crossing the border into the Shifters territory – the punishments are severe.

In this world Shifters are not naturally attuned with their animals from the moment they emerge around puberty.  No, this transformation is awkward, difficult to learn how to function on four paws instead of two feet and so forth.  The flying Shifters are not at all graceful in the skies, and many Shifters remain land locked, no longer even attempting flight.  Yet, there are always those who will not accept defeat in any form and teach themselves as much as possible about their animal’s abilities.   It is those individuals that eventually are discovered and brought into the upper level teaching academies scattered throughout the lands.  Guardians are the patrolling defense against civil unrest and humans trying to sneak across the borders.  It is into the Guardian “program” that those unique, will not give up Shifters are recruited.  Each species has their own version of an academy to teach these special Shifter students – for the dragons it’s Top Scale Academy – and it’s there that this series begins.

Asher longed to go beyond the boundaries of Cadia, he wanted to interact with the humans to see what was out there – and he took every chance he could get to push his dragon to be more graceful, more powerful in order to test himself against those mountains that represented the border.  On this day, Asher is turned back once again by one of the patrolling Guardians… but he’s gotten closer to the border than ever before.  Soon after he is visited by a high ranking Guardian and informed that he is recruited into the Top Scale Academy for dragons.  He is one of a class of three cadets – and his future is now on the line.

Quinn is stubborn, determined and perhaps a bit foolish for trying this stunt, but she will not go back.  She’s done with her photos being belittled by those with little to no talent themselves.  She’s going to win that photography contest and show everyone just how good she is – no one has captured Shifters in their natural habitat, in their animal forms before… until now when she brings back that one winning photo.  But she faces troubles almost from the moment she set foot over the border into Cadia.  In an attempt to avoid detection she’s been swept down a flooded creek and emerges right next to a hot springs – and a handsome, magnificent, naked Shifter.  In her efforts to avoid the punishments for a human crossing uninvited into Cadia, Quinn tells one lie – one lie that will come back to haunt her.

I was easily captivated by Asher and Quinn’s story.  They are an interesting, definitely sexy, and obviously meant for each other couple right from the start.  How Asher does everything in his power to help Quinn speaks volumes about the type of man he is.  And Quinn’s guilt, and surprise at discovering Shifters are not what she expected at all carry this romance quite well.  We’re introduced to Asher’s classmates, Zeke and Dom, as well as their instructors.  All will play a vital part in this series… and beyond.

Frost Dragon hooked me on this series from the first few pages.  I would definitely recommend the story and the series to any Shifter Romance reader.  You’ll find an intriguing, believable story and interesting characters as well as the development of troubles to come for the Shifter territory and Cadia.