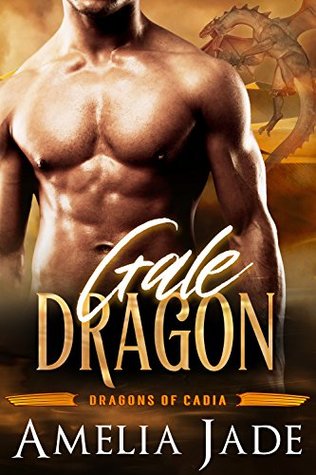 Presumptive heir to his family name, Zander Pierce will have it all. Money, power, and more at his fingertips. But on her deathbed, his mother says he must mate before she passes, or else his cousin will get everything. In a race for time, the dragon shifter decides it would be easier to just pretend. All he needs now is the right woman.

Clothing consultant Riss Levion is a human living in a shifter world. But even after living amongst them all her life, she immediately realizes there’s something different about the dragon shifter who just walked into the shop where she works. As he seamlessly inserts himself into her life, Riss begins to let her guard down. After all, who could resist the gorgeous sandy-haired shifter?

But as his secrets begin to emerge and she becomes more familiar with his position as a dragon Guardian of Cadia, Riss wonders if perhaps she’s made a horrible mistake. Can Zander prove to Riss that his feelings for her weren’t faked, or will a meddling third party doom the mates to a life alone?

Titles in the Dragons of Cadia series include:  Gale Dragon – Fume Dragon – Aurum Dragon — this series also connects to the previous Top Scale Academy and the Base Camp Bears series with same overlying major story line, recurring characters and the escalating of events in Cadia

Zander has had a pretty good life up to this moment.  He’s a rare gale dragon, of a linage that is old and high ranking, a Guardian in his own right and an instructor at the Top Scale Academy.  Not bad at all.  Except for one small detail that his dying mother is pointing out none too subtly… he is alone with no mate in sight, he’s not even looking.  Her final request, or demand, is that he find his mate before she passes… or he’ll lose his place as the Pierce heir and all that entails and she will pass the inheritance along to his no good, worthless cousin Kieran.  He will not allow that to happen and sets out to plot his way through a pretend romance with a human, well half human half grizzly, woman who works for a rather despicable manager at a clothing store.  It should have been easy, and it mostly was right up until he realized his mistake too late… this was far from pretend, and he was about to lose his mate because of his foolishness.

Riss is a human living legally in Cadia since she has one shifter parent.  She’s on her own, barely making a living on the commissions from her work at the clothing store, and constantly dealing with a puffed up, arrogant jerk of a store manager.  When Zander walks into her life she’s curious, persuaded and interested in seeing where this thing that is between them goes.  During an attempted mugging, Riss begins to realize just how helpful it is to have Zander around, even if she simply doesn’t like the way he behaves at times.  He’s winning her heart one date at a time… right up until he leaves without a reason and she learns the hard way what their supposed romance was all about.  Can she forgive and forget when the true reasons come to light?  Right now, the odds are not in Zander’s favor.

I enjoyed this first story in the Dragons of Cadia series where we get a look into the lives of the instructors from Top Scale Academy.  I really liked Zander, yes at times he’s a bit puffed up with himself but overall he’s a good guy simply trying to make his mom happy.  If he bashes in a few heads, and gets the girl along the way, well so be it.  Riss – well, Riss I didn’t connect with as well as I wanted to because Zander deserved an amazing woman and at times Riss fell far short in that for me.  But they worked well together, have some very sexy moments and battle the bad guys successfully.  So in the end she was right for Zander, and really that’s all that truly matters.

I would recommend Gale Dragon and the Dragons of Cadia series to any Shifter Romance reader.  The stories are solid, with believable characters in unusual situations.  An added bonus, for me, is getting to run into characters from previous stories.  I would strongly suggest, however, that you read the Top Scale Academy series as well or alongside of this series.  The connections are obvious and the overlying story line does move forward with each story, in my opinion.