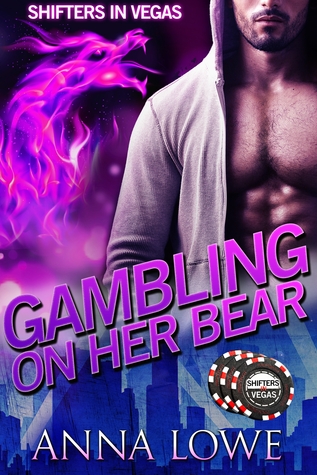 Dragon shifter Karen Proulx is in Vegas to hunt down a diamond, not a mate. But the minute she lays eyes on the brown-eyed bear of her dreams, everything changes.

Bear shifter Tanner Lloyd is a man on a mission to save his hometown. He doesn’t have time for a wild ride with the beguiling woman who turns his world upside down — especially one who’s half witch and a mortal enemy to his clan. But how can he resist the call of destiny, the pull of desire?

Read on for my thoughts on Gambling On Her Bear.

Karen’s last argument with her sister still rang loud and clear in her head.  While Kaya and Trey had indeed rescued her, and even now were on their way far away from the lights of Las Vegas – she found herself drawn back to the city where one bear shifter, one diamond and a plan of revenge for her kind continued to churn in her mind.  She couldn’t get him out of her head, sure it had been one amazing night but he certainly hadn’t contacted her for another date.  And in spite of her dragon making mate noises, Karen had bigger things to deal with right now.  Like getting the Blood Diamond back from those who had stolen it from the dragons years ago.  Which is why she’s standing on this ledge across from the casino where her prize is kept captive trying to convince herself that she can indeed glide, not fly, over to that building without killing herself in the flight.

Tanner had come to Las Vegas at the urging of his clan.  He had to spend some time far away from his mountain home in this crowded, smelly city in order to put the plan into play.  He really hadn’t counted on hooking up with the beautiful dragon shifter, or for that matter, constantly hearing his bear carry on a conversation about mates and forever after in his head.  His head needed to stay clear in order for this crazy plan to work.  His position in security at the vampire’s casino had made the next stage of his plan fall into place.  Sure, details still to work out but at least he had a better chance now.

That was until alarms went off all over the casino, and he watched his mate struggling in the arms of the baddest, meanest vampire in Las Vegas – the owner of this casino, Igor.  And the vampire he also was plotting against.  What in the world had she done?

Gambling On Her Bear is such a fun, sexy adventure of watching a half witch, half dragon shifter and a bear shifter fall in lust, and in love while somehow combining their plots against this particular vampire.  The action is fast paced, humorous from giggles to laugh out loud moments and sexy as only a sizzlin’ dragon and bear can possibly be together.  Watching Karen come into her own, accepting her power and her realization at the end was worthy of the fist-pump I mentally gave her.  *grin*  You’ll understand when you get to that part.

If you love Shifter Romance.  If fun, sexy and lighthearted with a touch of danger is your thing – then you’re gonna love Gambling On Her Bear.