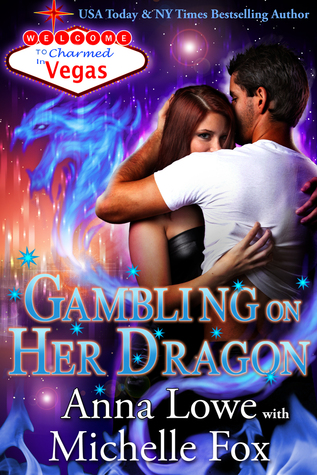 Shifter Trey Dixon can play poker like his wolf can howl, but what he doesn’t know about the shady underworld of Las Vegas gambling might just get him killed. By the end of one crazy night, he’s sucked into trouble — and falling hard for the petite dragon shifter who steals his winnings along with his heart. Before he knows it, it’s not just money at stake — it’s his destined mate’s life.

Kaya Proulx didn’t mean to fall for the mystery man who was supposed to be her ticket out of a tight spot. But that spot only gets tighter when her sizzling-hot lover leads her straight into a den of wolves. She has enough problems with vampires, gargoyles, and her missing sister. Now, the clock is ticking and her life is on the line. Can she trust her inner dragon and bet against the highest odds of all?

Read on for my thoughts on Gambling On Her Dragon.

Trey had promised everyone back at his cousin’s ranch that he’d be careful in Vegas, he wouldn’t take any risks just head in for some fun a bit of gambling and them head back home.  Yeah, well – that didn’t work out quite as intended.  The only clear memories he has of the previous night were winning a lot of money at the tables, sighting a beautiful woman across the room and now… here she is in bed with him and it seems she’s up for some early morning sexy times as well.  Too bad he doesn’t remember what obviously was their earlier encounter.

Kaya kept telling herself that she’d had no choice, as if she repeated that often enough she’d believe it and it would turn into truth.  The actual truth is that her sister, Karen, is in deep trouble and Kaya needs a ton of money to get her out of that trouble.  Her options were limited until she noticed the sexy shifter at the tables, and the way the staff was plying him with doctored up drinks as well.  He had a winning streak going on and it was no hardship to  lead him away from the trouble those drinks were about to bring into his life.  And maybe if he came up a bit short on his winnings he wouldn’t notice too much.

Gambling On Her Dragon is a fun, sizzling sexy romp through the underworld of Las Vegas – and the meeting of two mates who aren’t exactly doing what is normal for them at the moment.  I love little tidbits in stories that authors toss in, kinda like Easter eggs in books.  *grin*  Trey is the cousin of Lana, from the Twin Moon Ranch series.

If you’re looking for a humorous, lighthearted shifter romance that sizzles and burns then Gambling On Her Dragon is perfect for you.