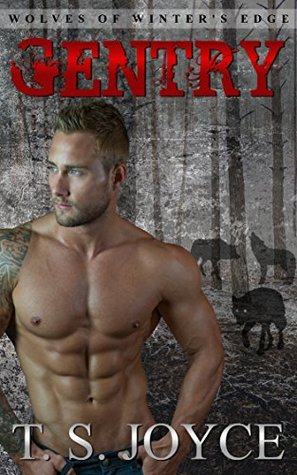 Gentry Striker is right back where he swore he would never be again—his hometown. All he has to do is tie up some loose ends and escape the darkness that has enveloped this place, but he can feel his destiny pulling him deeper into the shadows of this old town. The local pack has been taken over by one seriously unstable alpha, and Gentry is a rogue on a mission to escape. That is, until a striking beauty grabs his attention and demands to stay at the home he is renting out. The problem? She’s human, and isn’t safe in a town full of monsters. Perhaps Gentry is the biggest monster of all, but she’s got him wanting to dig back into his old life and become a better man. She doesn’t know it yet, but she has his wolf hunting her. And he’s not the only one.

Blaire Hayward is on a last-minute vacation to escape the monotony of her life for a little while. The plan is to spend some time in a cabin in snow country relaxing, but when she coasts into Rangeley, nothing is what it seems. The people in this town are acting strange, and there is something dark going on under the surface that she can’t quite figure out. And at the center of it all is Gentry Striker. Tall, snarly, sexy, and mysterious, he’s calling to her heart in ways she never thought possible. But the longer she stays, the more uncertain her life becomes, because Rangeley is no normal town. It’s a town of beasts, and Blaire is falling for the most dangerous of them all.

Titles in the Wolves of Winter’s Edge include:  Gentry – Roman – Asher

I was excited to begin T. S. Joyce’s newest series Wolves of Winter’s Edge.  And, I’ll admit, I was very pleased to find it has a totally different tone from my much loved Damon’s Mountains, Harper’s Mountains and Kane’s Mountains series.  This one has a darker, more sinister air hovering over it.  A family divided, a former pack in hostile hands and touches of witchcraft abound.  Yes, Gentry was all I’d hoped to find in the start of a brand new series – and more.

Blaire is one of the most likable and relatable heroines I’ve encountered in a long while.  She’s been through some rough times, she’s lost confidence in herself and for one week she’s looking for an escape.  What she finds will actually change her life forever, but at first she’s simply an overworked woman looking for some peace and quiet in a very,very strange town that is most unwelcoming to outsiders.

Gentry has been unwillingly pulled back to his hometown by the death of his father, his alpha.  He and his brothers, Roman and Asher had left Rangeley long ago and vowed never to return.  Now he’s being forced back with an unwanted renter for one of his cabins at the door..  All he wanted was for his brrothers to show up, spread his father’s ashes and get out of town fast… not complications in the form of a spunky, beautiful and adorably clumsy female… one that both he and his wolf have taken an immediate interest in.

Gentry sets up very clear rules for this world, right from the start.  To explain them would possibly give away spoilers, but know that there are reasons for some of the things Gentry does, even when he’s fighting with himself over those rules.  The brothers have some hard history between them, some brought on by their father’s choice in who would succeed him as alpha.  They all left home as teens and returned as matured men… well, angry, matured men.

There are definitely mysteries here to unfold in this story… and the threads will, I suspect, run through the entire series before coming to closure.  And that makes perfect sense as there are some pretty big things happening in this town, and to our characters as well.

I completely accepted that Blaire and Gentry belonged together.  Sometimes I have to work a bit to see how two people fit, not so with this couple,  They are both strong yet broken people in ways, but they didn’t need each other in the sense of being complete.  But they formed a untied front very early on that only increased as time and events changed things.  They simply belonged to each other, that was never in doubt.

I really enjoyed Gentry.  And I’m heading over to download the next story in the Wolves of Winter’s Edge series… Roman.  I would highly recommend this story to any Paranormal Romance or Shifter Romance reader.  It grabs your attention, makes you feel for the characters and gives you not only a good story but a bit of a mystery to solve as well.