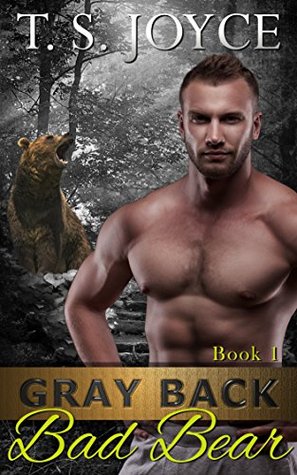 Matt Barns is on a mission. The goal of this mission? Find a mate before his broken bear drives him into madness. He knows exactly what he’s looking for, but when his bear finally settles for a mate, she dumps his world upside down. She’s funny, sure, but other than that, she’s not his type in any way. Or so he thought, because Willa is breaking down his walls and opening his eyes to a new life he thought he might never find.

Willamena Madden: smart-mouthed, fun-loving, loyal-to-a-fault, proud nerd and fragile human. She’s also somehow become the potential mate to a grizzly shifter. A shifter? She feels sorry for the critters and wishes humans would leave them alone, but Matt is proving he doesn’t need her pity. He’s a sexy, scarred up, growly beast-man, and she’s thinking he could be the one to finally take her V-card. But Matt’s hot and cold, and one of her friends is after a bucket-list werebear diddle with the man Willa’s falling for. And if that isn’t stressful enough, Matt’s Gray Back Crew is a loosely knit community of maniacs.

Matt feels important, but Willa has never been in more danger. If she can’t find a way to survive his people, she’ll have to go back to her safe life without her Gray Back Bad Bear.

Sex is like breathing to Shifters, mates have no problem loving their mates so this is an adult 18+ reader tale.

Read on for my thoughts on Gray Back Bad Bear.

Matt and Willa make a fun and unique couple in Gray Back Bad Bear.  Willa is such an adorable nerd and proud of it and Matt is such a bad boy, even if some of the reasons for his attitude came from a very ugly time in his life.  Somehow they simply work, and I imagine we’ll run into them again some time within the rest of the series.

I have to admit that there was one aspect of this story that… troubled me.  I think you’ll know it when you get to it.  I don’t really know how Matt managed to not commit murder right then – I know I was ready to.

The cover description really gives you the bare bones of the story and it’s enough to tease you into trying the story.  I enjoyed it very much and would not hesitate to recommend Gray Back Bad Bear to any lover of Shifter Romance.  I’ll be picking up the next in series in the next few days.