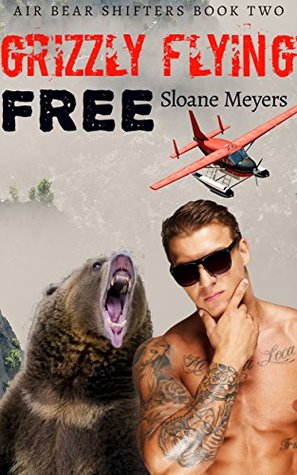 We’re given a lot of information about Anderson and Lexi in the cover description, so I don’t really feel like there’s a big need for me to add much more – don’t want to give away the entire story.  🙂

I think what really came across in Grizzly Flying Free, aside from a sexy romance is not to assume you know the truth about a person when you’ve barely met them.  Anderson makes assumptions about Lexi based on what he’s read about her, and one encounter in her school’s kitchen – big mistake.  What’s the old saying… Trust half of what you see and none of what you read?  Yeah.  It’s obvious that Silver, Anderson’s lively daughter is his entire world and he would do anything to protect her – even deny himself the companionship of a lovely human who finds him equally attractive.  Watching Anderson stumble his way through to the truth about Lexi was an entertaining time.

Grizzly Flying Free is a hot ‘n sexy romance  with a good, solid story – it was a delight to read.  If you love Shifters then this is one couple that you will enjoy meeting, definitely add it to your reading list.