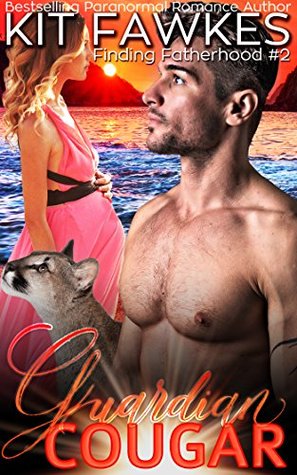 Cougar-shifter Jackson Sperry rescues Hannah from the ocean, and she has no memory of how she ended up floating in the Pacific. She also doesn’t remember who she is or how she came to be pregnant.

He’s drawn to her and determined to protect her as they unravel the mystery of her past. It isn’t long before he’s ready to claim her as his mate and raise her son as his own—but without knowing the details of her past, the future remains uncertain, and he fears someone is still hunting Hannah and her baby.

Guardian Cougar is an intense, emotional roller coaster ride.  When Jackson sees someone floating in the ocean, looking lifeless, he  jumps into action.  As he brings the unresponsive woman to shore he realizes she is heavily pregnant.  Taken to the hospital, the woman has awakened with no memory of who she is or where she came from… or who the father of her baby is.  The only clue they have is she is wearing a bracelet with the name Hannah on it, assuming that is her name.

Jackson is torn.  He’s attracted to her in a manner that says she is his mate, yet there is obviously someone in her life that she has a relationship with.  Hannah doesn’t want him to leave her, she feels safe with him and she is sensing danger to herself and her unborn child.  Call it mother’s instinct or survival but for Hannah her life line is Jackson.

As Hannah and Jackson’s relationship develops, he is very willing to take her as mate and claim the child as his own.  When Hannah’s memory returns the danger she is in becomes obvious – and Jackson will do everything in his power to protect them and keep his family at his side.

I enjoyed Jackson and Hannah’s romance.  Jackson was easy to enjoy as his protectiveness was endearing, and his sexiness was off the charts.  it took a little longer for me to warm up to Hannah, probably because we had so little information about her to go on… with no memory of her past, she was a blank slate at times.  As her memory returned it was much easier to identify with her and her terror.

I would recommend Guardian Cougar for readers who enjoy a bit of mystery, action and suspense woven through their Shifter romances.