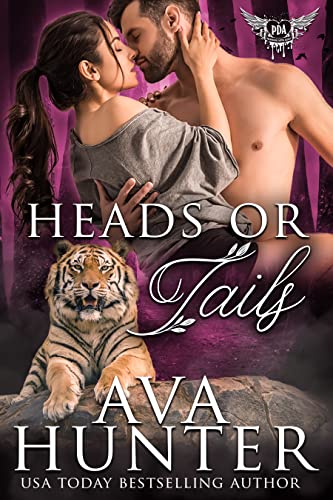 Rose Hauser, beloved music teacher, has a secret life that if discovered would destroy everything she’s worked for.

So when Gerri Wilder sets up Rose on a date with a shifter, Rose isn’t sure she wants to get involved with anyone who might expose her.

Dylan Kirby, tiger shifter and owner of K-Town Records, is stuck in the past with the death of a friend he should’ve saved. When meeting the woman of his dreams, he isn’t ready to move on. After all, he doesn’t deserve love. But damn, Rose is a beauty with kissable lips and full curvy hips he can’t get out of his mind.

When Rose suddenly ghosts him, Dylan can’t help but find out why. What he discovers sends blood boiling in his veins. He and his tiger want revenge for his sweet Rose. But more than that, he wants to save their mate from the same fate that destroyed Dylan’s life once already.

I love returning to Gerri Wilder and the Paranormal Dating Agency world especially when Heads or Tails kicks off a new series, Paws and Whiskers!

Rose and Dylan have secrets and issues that they need to deal with for themselves in addition to moving this fiery attraction they share beyond the shadows that they both live in.  I understood their reasons while not completely agreeing with them… that’s part of the fun of emerging ourselves in a fictional world, we can agree to disagree until the characters see the problem.

Because those secrets and issues play a major part in their storyline I don’t want to go into details that would spoil the story for anyone.  I can say that this couple is on fire, they’re likable and believable in both their actions and how they deal with those problems.  Add in a touch of danger and the magic is complete.  So, most of what you’d want to know before picking this one up can be found in the cover description.

I enjoyed myself in this world.  The tensions are high, the romance adorable while steamy, and the secondary characters help to bring this world to life.  I had fun, and isn’t that the whole point?  If you love a well-written, engaging Shifter Romance… and catching up with the Paranormal World’s best matchmaker ever, then you’ll have fun with Heads or Tails.