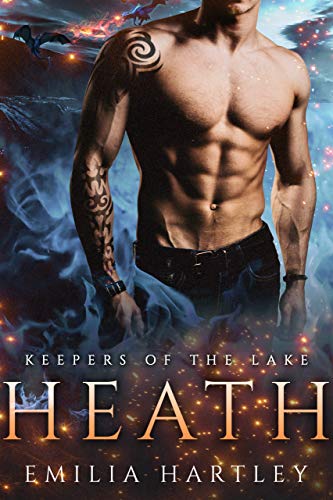 His one chance at happiness ended ten years ago.

Heath doesn’t want to be back on his old clan grounds. The ghost of his dead wife haunts him enough when he’s away from this place. Here, where Heath’s old clan leader killed her, the past doesn’t confine itself to haunting a room or a few private moments. It seeps into every place, every time, every thought. Heath won’t stay a second longer than he must to right the clan’s mistake from back then. At least that’s what he tells himself until he meets Buffy. The woman is wildly different from his dead wife, but he feels an unbelievable connection to her that makes him feel guilty in addition to haunted. Dragons only get one mate, and he’s had his. Or at least, he used to think so. Now, he’s not so sure.

All the same, he failed to protect his wife. He doesn’t deserve a mate.

Buffy isn’t looking for a mate. She can’t even figure out her own dragon. Hoping for a bit of relaxation and some help reconnecting with her increasingly distant and unpredictable beast, Buffy accepts her best friend Jude’s offer of a vacation cabin. The ramshackle hut and ominous lake are anything but relaxing, though, and Jude’s all wrapped up in her new man and her new clan. The only bright spot in this so-called vacation is a gorgeous, but moody neighbor. The attraction Buffy feels for Heath might be worth all the trouble of coming here if only the man weren’t so closed off.

She’ll get him to open up somehow. She and her dragon are beginning to feel like their sanity depends on it.

Heath is the haunting second story in the Keepers of the Lake series.  I say “haunting” because there really isn’t a better word for what Heath has been and continues to be going through since his wife died and he left his home, his broken clan behind when everything came crashing down.

At one time, Buffy would have considered Jules her best friend.  But now Jules has a new life with her new mate and her new clan.  Buffy’s not really certain why Jules invited her here since she rarely has time for Buffy, but even though this vacation isn’t exactly what she’d hoped for still, there’s a hot, handsome man who obviously doesn’t want to be here that she and her dragon would love to get to know better.  Her dragon has remained so quiet after the years of Buffy pushing her down, but now the blackouts she’s experienced have a different feel to them as though her dragon wants to awaken to be with one stubborn shifter who is fighting the mutual attraction between them.

And then there’s that lake which seems to cast a large shadow of doom over everyone – a lake that Buffy fears for some unknown reason.

I easily got caught up in this series, and especially in Heath and Buffy’s story.  Two wounded souls for different reasons, but they each touched my emotions in unique ways.

There is a continuing, and increasing danger in that lake, and this group of shifters is about to go head to head with the monster in the lake.

I adored Buffy, she’s stubborn and lost in the same moment, determined yet hesitant to reach out for what she wants.  Heath is a puzzle of hurt, anger, and wonder as he begins to see Buffy through different eyes.  He’s had his mate, or so he’d thought, but what if…

You’ll find friendship, growing attraction, danger, puzzles, and one captivating story as Heath and Buffy find their way to a happy ending.  If you love a really good Shifter or Paranormal Romance then this story and series would be perfect for you.  I’m hooked and can’t wait to dive into the next book.