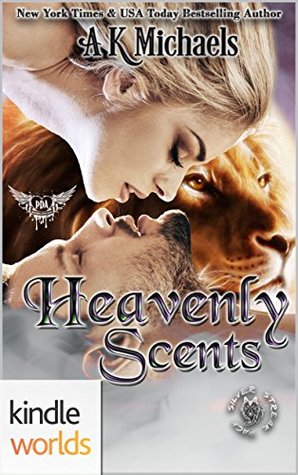 Take one cheeky Wolf willing to do anything, even give herself as payment to help her best friend find a mate, and never expected the bill owed to be collected. Until it is.

Add in the most infamous Matchmaker in the Universe, Gerri Wilder.

Stir in said Love Guru’s nephew to help in her devious plan, a hot-as-Hades Lion, who needs a mate more than he needs a chocolate chip cookie.

Let the above bake until hot and steamy and add a dash of evil bad guy.

Now, that’s a recipe for love everyone can get behind.

Titles in the Silver Streak Pack include:  Her Purr-fect Surprise – Heavenly Scents –

Heavenly Scents brings us Connie’s story – she might have orchestrated finding her best friend her mate through Gerri Wilder’s services, but in helping her friend find ultimate happiness Connie has been left with sadness and loneliness when her friend and mate moved away.  But never fear, Gerri has everything under control with some artful rearranging that is.

I liked Rocky and Connie’s romance, there is attraction, confusion, a touch of danger and some sexy times.  Yet, I was also a bit confused by Connie’s not understanding what that scent meant… she’s a shifter, it should have been obvious.  I don’t know why but that little tidbit bothered me throughout this story and probably had something to do with my enjoyment level of it as well.  Yes, it’s a small thing but it’s also a driving force in their story.  In any event, I did enjoy my time in this world and would recommend Heavenly Scents to any Paranormal Romance or Shifter Romance reader… especially those readers who love the Paranormal Dating Agency universe.  I’ll be keeping an eye out for more from the Silver Streak Pack series.