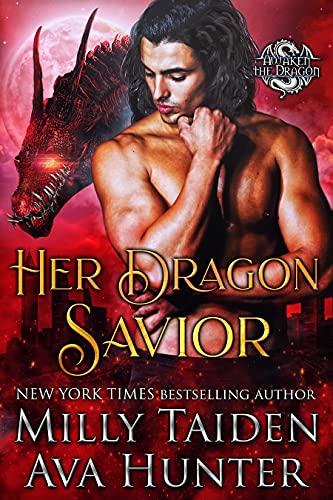 Dragon-shifter Evair awakens to an attack and is wounded as he defends himself. He’s drawn to a beautiful but strong-willed witch who helps him control his power and shifting abilities. But he’s much more interested in finding out how to make her his. And once he gets a taste of her, he knows he’s never letting her go.

Penelope can’t believe the gorgeous dragon needs her. She’s happy to teach him about the new world and help him figure out why he was woken. Love and romance weren’t in the cards. She tries to fight it, but their bond is stronger than she realized. Are they mates? Could he be right? His flaming kisses and warm caresses make her hope he is.

A group of poachers is hunting down Evair’s kind. It’s a race against time to get to them before they kill more of his people. Love blooms in the midst of their battles. Their love will either survive or die crushed in their war for survival.

Her Dragon Savior begins the Awaken the Dragon series with an intense situation as Evair is attacked almost immediately upon awakening from a very long sleep – but why was he awakened in the first place?  And who is out to kill him on sight?

While Evair’s first instinct is to fight for his life, it was that second instinct to burn down every human building within sight that wasn’t a great idea which is quickly proven when Penelope, a witch who believes her powers to be not so great, stops the magical threat Evair had sent for her small town.  One small, smart, sexy, annoyed human is about to stand nose to nose with an ancient dragon and in so many ways bring this stubborn dragon into the modern age.  It won’t hurt that plan one little bit when Evair realizes that Penny is his mate, but it will change his long life forever… should they survive that is.

I adored Evair and Penelope so much and for different reasons.  Evair is so cute and clueless about the modern world, after all, he’s been asleep for a very long time and the world has moved along without him.  Penny is stronger than she believed, more stubborn than Evair expected, and together this odd couple will take on some very nasty folks in order to save not only Evair but the other unawakened dragons still in their slumber as well.

I always love when this writing duo releases new work, and the Awaken the Dragon series looks to be one heck of a ride to come if Her Dragon Savior is any indication of the intensity, sexiness, and danger we’ll find in future stories.  I had a blast here, and if you love your Paranormal/Shifter Romance with a strong dose of humor, some sizzling moments, bad guys you’ll despise on sight, and the lure of ancient dragons then you’ll find your happy place right here.