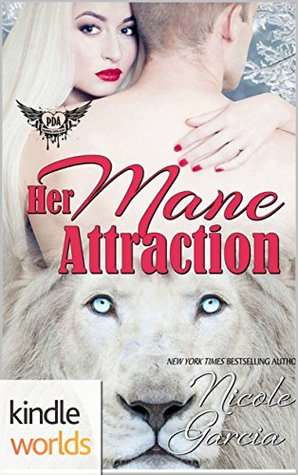 Her Mane Attraction is a fast paced, steamy story with a definite dangerous edge to it.  While I enjoyed this story in general, there are enough bits that have my nitpicking brain going into overdrive.  These things should not have taken me away from and out of the story as often as they did… but that was my reaction.  I spent more time stopping reading and thinking, “What the heck?” than I did wrapped up in Adonis and Eira’s story.

A book’s cover is my first visual introduction to that world.  Eira is a blonde.  Adonis is an albino.  Yet the cover has a white-blonde and a light brown haired male.  As a lover of all things shifter my knowledge of a mate’s scent is compelling, drawing, inescapable… not something that would make a male act as though his mate stank to high heaven, and let her and everyone around him think the same.  I also understand that Adonis didn’t hate the scent, he was overpowered by it, not certain what to do with this knowledge that his mate was right in front of him.  I get that – but the impression I was left with was quite simply that this “hero” is an absolute jerk and at that point of the story if I  were Eira I’d be running for the hills.  And why in the shifter’s world would you refer to a shifted wolf shifter as a K-9.  I just…

So to say I”m torn on Her Mane Attraction is an understatement.  I’m not even certain at this point that I”m going to post this on Goodreads or Amazon.  As this review is turning into a rant instead of a review… but acknowledging that fact does not change my reaction to a story that could have been really good… except for those nitpicking details.