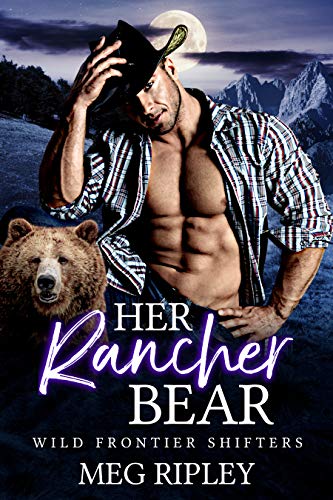 Austin
Now that my dad’s gone, the survival of our family’s ranch is in my hands.  And as much as I can’t stand the idea, I’ve agreed to open it up to city slickers looking for a taste of Wyoming life.  The last thing I want is for nosy humans to be roaming around my territory.  But desperate times call for desperate measures.  So I’ve gotta prepare for our next round of guests.

I’m showering up out back after a long day’s work when I feel three sets of women’s eyes staring at my backside.  Only one of them matters, though.  My grizzly demands to show himself, knowing she’s the one.  Human or not, she’s mine.  But how can I risk her knowing the untamed beast lurking inside me?

Harper
I thought I had it all:  A great Manhattan apartment, a great job at a food magazine, a great fiancé until the sleazebag had a fling with my maid of honor.

A girls’ week at a Wyoming dude ranch will be the perfect escape from my troubles.  But the gorgeous, steely-eyed rancher who runs the place gives me a new problem to contend with.  He’s gruff. Mysterious. Has zero people skills.  So why does he light every cell of my body on fire?

The whole point in coming out west was to forget about my man, not to fall for a new one.  Especially one that can secretly change into a bear.  But when his truth comes out, Austin’s about to find out he’s not the only one hiding secrets.

Her Rancher Bear begins the Shifter Nation: Wild Frontier Shifters series with a fun, sexy, action-packed romance… with some danger mixed in for good measure.

Austin was far from happy about opening up the family ranch to outsiders as a western adventure/dude ranch.  First of all, shifters and humans should not mix… and Austin and family are definitely shifters.  Second, this is shifter territory, and they aren’t the only shifters around – including their annoying, dangerous neighbors on the nearby ranch.  Trouble just waiting to happen.  And third, well, Austin is a grumpy bear who would rather be left alone, run his ranch like always at a profit – which is no longer happening.  So, reluctantly, Austin is running a dude ranch for humans.

Harper just had her world turned upside down when her fiancé cheated with (worst of all) her maid of honor.  She and two friends have headed west to this western adventure ranch to get away from all that drama, have a girl’s week, maybe get drunk, and figure out what to do now.  She didn’t expect her introduction to the owner to be the sight of his sexy backside while he’s taking an outdoor shower.  But, she wasn’t about to walk away either.  This vacation just started to get interesting.  And while Harper might not know that Austin is a shifter… he doesn’t know all of her secrets either.

I was easily caught up in Her Rancher Bear.  The sass, the attraction between Austin and Harper (for all they tried to ignore it) was obvious… well, they are mates, after all.  The danger from the nasty pieces of work on the neighboring ranch brings a level of tension to their story as things quickly get out of hand and Austin’s secret is revealed.  Harper’s friends couldn’t be more opposite if they tried and I’m curious as to what type of romances these ladies will eventually have.  In all, I had fun here, will be following the series, and would not hesitate to recommend it to any reader who loves a good Shifter Romance.