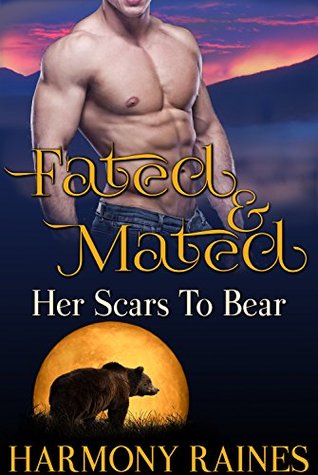 Curvy bear shifter, Viv, has scars. After being attacked by an ex-boyfriend, she went home to the safety of her home town, but Viv wants the chance to find her mate – and love. Signing up to the Fated and Mated Dating Agency seems the safest way to accomplish this. She only wants to meet up with her bonded mate.

Excited to receive a message from another shifter, who says he is her mate, she is left disappointed when she looks at his profile and feels nothing towards him. But is everything quite what it seems?

Mountain ranger, Tad, has seen his sister find her mate, and knows the dating site works. When he sees the profile of the shifter of his dreams, he sends her a message, and patiently waits for a reply. And waits…

When at last Viv and Tad finally meet, she struggles to allow him to see her scars, and admit what happened. Can she allow Tad in, or will they be torn apart forever, when her past catches up to her again?

Her Scars To Bear is an emotional story that touches on the reality of the aftermath of abuse.  Intriguing with a solid couple and fast moving danger, this is a story that touches the heart and perhaps on some level our fears as well.

Viv has returned to the safety of her parents and her home town.  She has the scars of her last relationship worn boldly on her body as her abuser made sure to mark her as his in his rage and madness.  Even though she still has the emotional trauma of his attack in her head, Viv wants to wipe it out of her heart as quickly as possible.  She desperately wants to find her fated mate.  She knows he’s out there and she longs for the love and protection of the one man who is bound to love her just as she now is… she hopes.

Tad has reached the stage of life where he just wants to settle down with his fated mate, raise some cubs and enjoy the type of relationship his parents always have.  But so far he hasn’t found her on his own.  So he signs up at the dating site his sister helped create with hopes of finding his elusive mate.  When he sees the picture of Viv – he knows, there she is finally.  He sends off a message with high hopes.  Unfortunately, Tad has a brother, Jay, with a mile wide mischievous streak who thinks the whole fated mates thing is just plain silly.  Yeah, gotta love brothers who toss wrenches into the works.

After a shaky beginning, Tad and Viv acknowledge they are indeed mates and begin to get to know each other.  Tad is all for moving forward quickly, but he senses and sees his mate’s hesitation.  She’s hiding something and he hopes that she’ll trust him enough with everything – the good and the bad.

Emotions run high in Her Scars To Bear.  Tad is a loving man, strong, steady and determined to do everything possible to make his mate feel loved and safe with him.  Viv trusts Tad, but she’s still afraid.  She sees the scar as a visual reminder of being foolish in who she trusted and is afraid that her mate will find her unattractive, in spite of being bonded.  And she fears that her attacker will return putting the man she loves in danger.

This first story in the series is a good set up for the following stories to come.  Interesting secondary characters and a strong family make looking forward to the next journey an easy decision.  If you love Shifter Romance then Her Scars To Bear is an excellent beginning to what will be a touching and unique series.  (I’ve read the next two books, so I can say that with honesty *grin*)