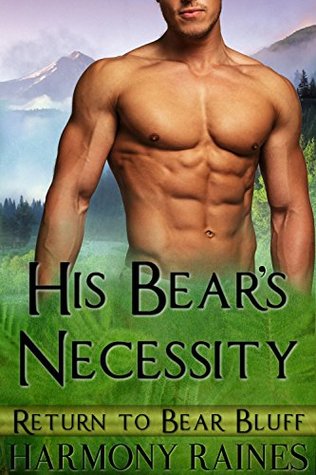 Growing up, was tough for Jed Creswell, his family struggled for money, and sometimes he had to be a little creative to help put food in his younger sibling’s stomachs. But that’s the past, and for the last few years, he’s been working away from Bear Bluff. Now he’s returned, a reformed character who is determined to work hard and put his brother and sisters through college, so they get a better start in life.

That is until he meets Amanda, his mate, from that moment on he is torn, between the family he has, and the family of his own he wants, with the woman he is going to spend the rest of his life with.

Amanda wants a new life in the town her grandma moved to, when she fell in love with a bear shifter. What she doesn’t need, is a man in her life, she’s done with them. She doesn’t trust them, and doesn’t need them.

However, when her boss, Dylan Taylor, takes on a new employee, Jed Creswell, the way he looks at Amanda leaves her in no doubt he thinks she’s his mate. Growing up with the stories her grandma used to tell her about what it was like to have a bear shifter as a mate, Amanda is tempted into giving Jed a chance.

Until Amanda’s past catches up with her, and she doesn’t know if it would be better for everyone if she moved on again.
She soon realizes Jed is not going to let that happen, not when she’s his bear’s necessity.

She’d been young and impressionable.  She’d paid the price – she’d done the time.  Now Amanda was looking for a fresh start, away from the troubles of her past.  She had inherited her grandmother’s cabin in Bear Bluff, so it was there that her new beginning took flight.  Technically she didn’t need the job to survive, but she did need the job for the interaction with other people, to prove to herself that she was worthy of trust and friendship once again.  She hasn’t been completely honest with her new boss and she’s hoping that when she does tell him about her past that he’ll see the valuable employee she’s been… before he decides to fire her or not.  What she wasn’t expecting is to find one handsome bear shifter overcome at the side of the office building… as she was as she stood in the doorway.  She may be human, but she did have shifters in the family and what she and this stranger were experiencing right now sure sounded like he just found his mate… her.

Jed was looking for a second chance in his home town of Bear Bluff.  Now he’s praying that Dylan will look beyond their past as youngsters and give him a chance at a steady job.  As he’d approached the small office building he felt… her.  His mate was in that building and there was no way in the world that he was ready to find her, but fate had other ideas.

Both Jed and Amanda had pasts that they’d overcome.  Starting a future together seemed simple to Jed, for Amanda the future was tinged with fear that her ex would come and ruin her new start, her future.  And when he does exactly that, she has one very determined bear and a community at her side.  But, truth is, she didn’t need them since she managed to stand up to him herself… knowing she’d be backed up all the way by those that loved her exactly as she is… past and all.

His Bear’s Necessity is a fun, fast paced Shifter romance that is completely satisfying.  We get to meet up with the couple from the first story in this series, and that makes a difference to the overall enjoyment of this couple’s story.  They have a community that cares and takes care of their own.  That’s always a plus in any series I invest in.  I enjoyed this one very much.  I believe you would too, especially if you like a story that is based on deep family love, and a situation that is completely relatable and believable.  I’d recommend this story and series for any Shifter romance reader.  It captures your attention and your emotions.

(now, I’m actually gonna jump ahead a few stories and go download and read the Christmas novella of the Return To Bear Bluff series.  I want to get to that one before the holiday season is past *smile*)