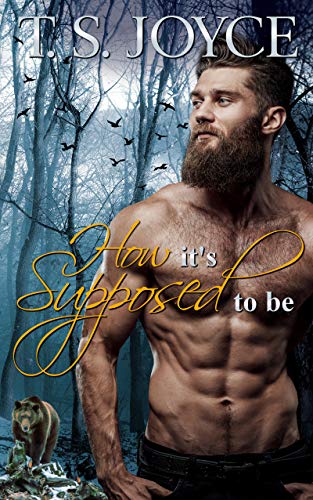 Auxor Bane has made a pact. He and his brothers made a promise to each other that they would let their bear shifter lineage die off with them, for the betterment of mankind. They aren’t fluffy, and they aren’t cute. As one of the three remaining bear shifters alive, Aux struggles daily with the predator inside of him. His life is simple and manageable so long as he never breaks the rules enforced by his brothers. Rule number one: Never touch a human’s skin. Rule number two: never fall for one of the fragile creatures. Rule number three: never, ever let a human know what he is. But when he stumbles upon a car wreck in the remote Montana mountains, during the biggest snow storm of the year, he can’t just leave the stranded human to die. And in a series of unfortunate events that follow, he also can’t let her out of his sight if he wants to survive her.

Gwen Smithers had a plan. A great plan. A plan that will get her out of the stagnancy of her life and onto an adventure. This week was going to change her life, but in a split second on an icy road, all of her plans were derailed. Her rescuer is growly, and ill-mannered, and won’t show his face. And his eyes are such a strange color. But as she struggles to trust the mysterious mountain man, he’s revealing a strange and dangerous culture she never would’ve imagined existing. For the life of her, she can’t conjure up fear of Aux. Her human instincts must be broken because it’s becoming clearer and clearer…Aux isn’t the man she thought he was. In fact, he isn’t a man at all. And the more she tries to understand him, the more she wants to break the oath he has made.

How It’s Supposed To Be starts off the Oath of Bane series with a story that grips the imagination as two people, seemingly quite by chance, encounter each other, and that discovery will change how they had believed their lives were supposed to be – whether that’s a good thing or not is still up in the air – for now.  Frankly, everything you’d want to know before picking up Gwen and Aux’s story can be found in the Cover Description.  What isn’t there are the emotions that this one will wring out of you as one oath is about to be broken, and a new chance at life is about to be found.

I found Gwen to be charming if a bit scattered at times.  She’s dealing with her reality and starting to see the parts of herself that she’s pushed down for so long coming back to life once again.  Being happy in her own skin, knowing that she is certainly good enough for this mountain man has her confidence growing and her outlook on life taking a turn in a different direction.  I liked her and her excitement at chickens, pigs, and the outdoors life definitely gave me a few chuckles along the way.

Aux is… complex, and I hurt for this bear shifter in so many ways.  He and his brothers have made a vow, an oath… one that he is fighting so hard to not break.  But how was he to know that his mate would find him up on this mountain, secluded from most of the outside world?  These brothers have, to their minds, very good reasons that they should be the last of their kind.  Yet, when faced with a life of solitude and loneliness… or a life with Gwen, Aux knew what he wanted.  Then fate in the form of his brother steps in.

How It’s Supposed To Be is full of angst, sexy times, laughter, the feeling of impending danger, and some hard choices for both Aux and Gwen.  I loved being in this world, and if you love this author’s work, if a growly bear shifter and his bubbly, talkative mate sound like folks you’d like to know, if a good, solid Shifter Romance sets your heart aflame then this series will be perfect for you.

Available for the Kindle as this series is in KU